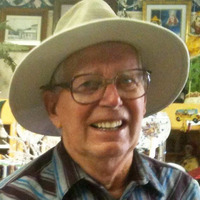 Albert Eckman, 90, went to be with his Savior and his wife, Janice, on Aug. 19, 2021. Services will be held at a later date. Cremation has taken place.

He was born on May 29, 1931, to Jacob and Christine (Diegle) Eckman. Albert grew up on the family farm in Burnstad, North Dakota.

While working in Hardin, Montana, at the sugar beet factory, he met the love of his life, Janice Ann Muhlbeier. The two were married on May 31, 1964.

Albert started working for Campbell Farming in their grain elevator. Albert and Janice bought a small piece of property near Hardin where they raised their four children and helped raise several others.  Albert often remarked that he never knew how many kids he would have when he got home.

One of Albert’s passions was woodworking. Albert made toy trains, vehicles, and baskets that he gave away to family and friends along with making all the trim work in their log house.

Albert and Janice had an acre of garden and many animals as their children grew up. A mutual love of gardening and flowers led to them to build a greenhouse in 1976.  They operated the greenhouse until they moved to town in 2016.  His vast knowledge of plants and caring for them will be missed by many.

He was preceded in death by his wife, Janice; his parents; sister, Lillian; baby brother, Marvin; and son-in-law, Dennis White.

Donations can be made to the donor’s choice.

To order memorial trees or send flowers to the family in memory of Albert Eckman, please visit our flower store.