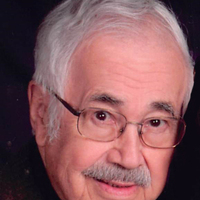 A private memorial service will be held for family and close friends 10 a.m. Monday, May 2 at Church of the Cross, 1004 East Highland Acres Rd, Bismarck.

Burial will be held 1 p.m., Monday, at the North Dakota Veterans Cemetery, Mandan.

Albert was born in Turtle Lake on September 24, 1929, to Gus and Marian Samuelson. He attended the local public school, Class of 1947, was active in sports and for his entire life treasured the many friendships made during his youth in that very unique community. The family owned the local drug store and all family members worked actively in the business. He was active, a hard worker and at age 15, spent a summer working on a commercial purse seiner, fishing salmon in Puget Sound and southeastern Alaska.

He went on to attend the University of North Dakota, where he graduated in 1950 with a Bachelor of Science degree in Chemistry. Shortly after graduation, the Korean War erupted and he entered active duty in the US Army with the 231st Combat Engineer Battalion, an ND National Guard contingent from Grand Forks. After two years of active service, he was released and returned to UND. He enrolled in medical school where he received a BS in Medical Science in 1954. In 1956 he received his medical degree (MD) from the University of Cincinnati.

On August 27, 1950, he was united in marriage to Betty Laverne Carson from Buxton. They spend 49 years together until Betty’s death in 1999. In 2000, he married Carol Nelson Neubauer and they were married until her death in 2019.

Except for periods of training, Albert’s professional career was spent exclusively in the Bismarck area. He practiced general medicine with the Q&R Clinic for two years after medical school then entered a psychiatric resident training program at the Menninger Clinic/Veteran’s Administration program in Topeka, Kana. After completion of that program, he returned to Bismarck to work for the North Dakota Department of Health as a director of the Mental Health Services program whose responsibility was to plan and develop Community Mental Health Centers in North Dakota. While with the health department, he also served as Medical Director of the State Psychiatric Clinic, located in the former Governor’s mansion, which was the first out-patient psychiatric facility in western North Dakota.

Dr. Samuelson was one of the first psychiatrists in western North Dakota. His primary interest was the development of community treatment services for the seriously mentally ill. Though he entered private practice in 1966, he continued to provide psychiatric services to mental health programs in Williston, Dickinson, Minot and Bismarck, where he served as a director of the first mental health center, located in the basement of the WW Memorial Building. Consultative services to the State Penitentiary, Indian Health Service, Social Security Administration and the Veteran’s Administration were also provided during varying periods of his professional career.

As a Clinical Professor of Neuroscience, he was very involved in the development of the four-year medical school program at UND. For many years he served as the local coordinator of neuroscience teaching for two brief periods as Interim Assistant Dean on the Bismarck campus. He was involved in the training of many UND physicians currently practicing in North Dakota whose friendship and collegiality he was always treasured during his long medical career.

He is preceded in death by his first wife, Betty; and his second, wife Carol.

In lieu of flowers, the family suggests that any donations may be made to the North Dakota Mental Health Association.

To order memorial trees or send flowers to the family in memory of Albert Samuelson, please visit our flower store.