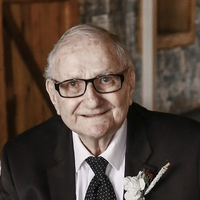 Alexander “Alex” Bosch passed away on March 9, 2021 at the age of 91 surrounded by his caretakers at Lakewood Landing. His two children were also by his side who will continue to honor his legacy by living their lives to the fullest.

Mass of Christian burial will be held 11:30 a.m. Monday, March 15 at Cathedral of the Holy Spirit, 519 Raymond St., Bismarck. A service livestream will be available at this link: https://venue.streamspot.com/event/MjU2MzUzOA==

Visitation will be held from 2 to 4 p.m. Sunday at Parkway Funeral Service, 2330 Tyler Pkwy, Bismarck. A rosary/vigil service will begin at 4 p.m.

Burial will be held 1 p.m. Monday at the North Dakota Veterans Cemetery, Mandan.

Alex was born on April 30, 1929 in Linton, the son of John and Cecilia (Feist) Bosch. After completing his middle school years, he left school to join his father in operating their family farm. This is where his love for gardening, yardwork and all things outdoors began. Alex is also a veteran as he served in the US Army for a number of years.

The simplest pleasures in life brought great joy to Alex. He loved a social evening with friends and family, whether that involved playing the accordion (he was in the band “Alex and the Twilight Troubadours” for 45 years), horseshoes, or Bingo at the Eagle’s Club. His pleasant and humorous personality was contagious to everyone who crossed his path. Alex loved to entertain; family gatherings often involved him playing the organ, dancing the Polka with his wife and telling jokes. He took pride in his yard, lawn mowers and cars; all of which were kept in impeccable condition. His passion for music and cars lives on with his children and grandchildren.

Alex was married on May 18, 1953 to Katherine (Katie) Doll from Napoleon. Katie passed away six years ago; they are now reunited to celebrate their 68th wedding anniversary in heaven.

Alex was preceded in death by his parents, John and Cecilia Bosch; brothers, Ralph, Benedict and Peter Bosch; and his sister, Tillie Stout.

The family of Alex would like to extend their heartfelt gratitude to Lakewood Landing Assisted Living Community and Hospice Red River Valley for providing the utmost care and making his last hours of life full of peace and comfort.

To order memorial trees or send flowers to the family in memory of Alex Bosch, please visit our flower store.