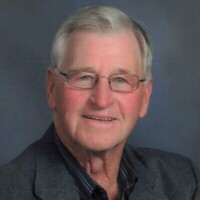 The prayer service for Alfred will be livestreamed on our website tonight, Oct. 7, beginning at 7 p.m. When the service becomes live, a play button will appear in the center of the black box, click the play button to view the service. With any issues, please refresh your page and/or turn up your volume. Due to potential weak network in a rural area, the livestream might not be available. In that instance, a recording of the prayer service will be posted. The church will be livestreaming the funeral service tomorrow, Oct. 7 beginning at 2 p.m.

A service livestream will be available for viewing on St. John Evangelical Lutheran Church's Facebook page at the following link, https://m.facebook.com/st-johns-lutheran-church-tappen-137622379663986

Alfred Charley Falk was born on March 27, 1931, to Carl and Mary (Briese) Falk on a farm near Tappen and passed away peacefully on October 2, 2021. He was very proud to live to be 90 years old. He attended and graduated from Tappen High School and played on the basketball team.

On February 3, 1951, he married Mary Lou Kalmback in St. Paul, Minn.  There they lived in an apartment where Mary Lou took a streetcar to work at a paper and stationary company and Alfred worked for Swift meat packing plant and Clark’s gas station.

In Spring 1951 they returned to Tappen where they lived in town for a short while before starting to build a house on the family farm South of Tappen.  They lived in the basement for eight years while they saved money to build the house in 1959.  There they raised six children.

In his younger years he participated in a pool league and a bowling league.  He enjoyed dancing and going to play whist with neighbors and friends.

Alfred took over the family farm and made it his lifelong occupation.  He was one of the first farmers in the area to have irrigation systems, and ran irrigation systems for close to 50 years.   He raised small grains, grain corn, silage and hay.  He also raised Charolais cattle, Charolais bulls for 20 plus years, as well as other beef cattle,.

In 1980 he began farming with son Kevin and his wife Sara, and they worked together on the family farm for 41 years.  At 86 years old he was still operating the combine.  He loved farming and talking about farming.  He was a very proud man and loved driving around in his NEW pickup.  He often drove out to the farm to see if things were being done RIGHT!  Many conversations were had with Kevin as to what was happening “Today.”

Alfred had seen many changes in farming in his lifetime.  He used to plow with a team of horses, and now the tractors drive themselves.

During his retirement, he enjoyed spending winters in Arizona for 20 years with his special friend, Eunice.

Alfred was very proud of his children and loved to be visited by his grandchildren.

Fun fact, in December 1950, his dad let him take a 1950 Chrysler to St. Paul, Minnesota, where he was arrested for driving such a nice car as the police thought it was stolen because no kid could afford that kind of a car.  There was some kind of problem with the license plate, so he spent a night in jail until things got straightened out.

Visitation will be held from 6 to 7 p.m. Thursday at the Eastgate Steele Memorial Chapel, Steele. A prayer service will begin at 7 p.m. with Rev. Gary Kalmback (brother-in-law) officiating.

Burial will be held at Fisher Cemetery, north of Tappen.

To order memorial trees or send flowers to the family in memory of Alfred Falk, please visit our flower store.