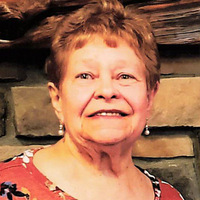 Alice Pokrzywinski, 77, Bismarck, was welcomed into heaven Oct. 28, 2021. A memorial service will be held 2 p.m. Monday, Nov. 1 at Parkway Funeral Service, 2330 Tyler Pkwy, Bismarck. Alice’s wishes were to be cremated. Family will greet visitors one hour prior to the service.

Alice was born February 3, 1944 to Leo and Ann (Hoon) Schneider. She was raised and educated in Linton.

On July 29, 1960, Alice married Eugene Zacher in Linton. They moved to Bismarck in the early 60’s for Gene’s career. In 1961, they welcomed their first daughter, Mary Ann, who passed away shortly after birth. From 1962 to 1967, they welcomed four more children: Betty, Brian, Barry and Brenda. Eugene passed away on December 18, 1987.

On November 11, 1993, she married Chester Pokrzywinski and they lived in various places, including Fargo, Minnesota and Wisconsin. A few years after Chester’s passing in 2009, Alice moved to Rugby to be closer to her daughter, Betty. In 2016, she moved to Bismarck to be close to her children and grandchildren.

Alice liked crossword puzzles, word searches, reading, cooking and listening to polka music. She had a love for animals. She enjoyed being around people and welcomed them with twinkling eyes and a smiling face.

She was preceded in death by her husbands, Eugene Zacher and Chester Pokrzywinski; infant daughter, Mary Ann Zacher, and her parents, Leo and Ann Schneider.

To order memorial trees or send flowers to the family in memory of Alice Pokrzywinski, please visit our flower store.