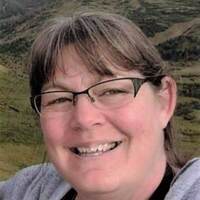 Visitation will be held from 5 to 8 p.m. Friday, April 9 at Parkway Funeral Service, Bismarck.

Alice was born on June 22, 1971 to Raymond and Mary Skoglund. She grew up on a farm east of Baldwin and graduated from Bismarck High School in 1989. Alice went on to lead a career in healthcare with St. Alexius and later Mid Dakota Clinic.

Growing up, Alice enjoyed spending time on her grandparent’s farm with her brother, Russel, sister, Naomi and many cousins. She enjoyed being involved with any family activity and would take a lot of pictures to capture the fun she had while she was there. She would always have her camera or video recorder ready so she could take a nice nature photo or capture a fun family moment.

Alice cherished her role as a mother to her son Sam and she later added bonus kids Molly, Emma and Erick. She loved spending time with her niece, Nikki and nephew, Seth and later her great-nieces, Lily and Grace, and nephew, Lucas.

She was happiest when surrounded by the children in her life. She was known for embracing all of the silliness that comes with childhood, including throwing play dough parties, digging in dirt and starting water balloon fights. Alice enjoyed photography and covered her home in photographs of her growing family and good friends. She is remembered for her sense of humor, quick wit and never-ending patience.

Alice was preceded in death by her mother Mary Skoglund; brother, Russell; sister, Heidi and her loving grandparents.

She is survived by her father, Ray (Pat) Skoglund; sister, Naomi (Buck) Becker; niece, Nikki; nephew, Seth; her children, Sam, Molly, Emma and Erick and her grandchildren, Fredrick, Joyce and Agnes as well as great-nieces and a nephew.

To order memorial trees or send flowers to the family in memory of Alice Skoglund, please visit our flower store.