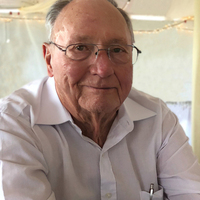 Allan Elliot Stolz, 87, passed away on Sept. 23, 2022, in Bismarck, with his wife Marge of 65 years by his side.  He courageously fought a long and hard battle with lymphoma.

Allan was born on December 19, 1934, to Anna (Aisenbrey) and John Stolz on their homestead in Van Hook, ND.  Allan was the youngest of three children - Olivia being the oldest followed by DeLores.

He attended and graduated from Benson County Agricultural and training school in Maddock, ND in 1952.

On October 14, 1954, he was inducted into the United States Army 14th Armored Calvary Regiment 2nd Battalion as a track vehicle mechanic, stationed in Bad Kissingen, Germany where he patrolled the border.  He was honorably discharged in 1956 after two years of service overseas.  During his military career he received commendations for 2nd Class Gunners Badge (3.5 rocket launcher) Expert (SMG 45 cal.) and Good Conduct Medal.

Allan went on and worked as a salesman and was promoted to General Manager for Farmers Union in New Rockford, Devils Lake, Maddock, Oberon and back to New Rockford, from 1957 to 1977.

From 1977 to his retirement in 1999 Allan worked as Ag. Products Marketing Representative, Agronomy Center Manager and Express Center Manager for Cenex Land O’Lakes in Minot, ND.

On September 22, 1957, Allan married the love of his life, Margelane Neer, in Oberon, ND. The couple had three children Rickie, Michael and Janet.

After retirement he spent many mornings at Dakota Tackle in Bismarck, sharing stories over coffee with the boys.  Allan was an avid hunter and fisherman, but his passion was spending time with his family, creating memories we will cherish always.  In 2012, Allan and Marge drove to Anchorage, AK for a very memorable family reunion.

In 2008, Allan had a health scare and was given the ultimate gift of life, a kidney donated from his son-in-law, Jon Permenter.  The kidney gave Allan 14 wonderful years, he lived each and every day to its fullest. We are forever grateful to Jon for this gift.

A funeral service will be held 10:30 AM, Friday, September 30, 2022, at Parkway Funeral Service, 2330 Tyler Parkway, Bismarck. Visitation will be held one hour prior to the service.

Burial will be at the North Dakota Veterans Cemetery, Mandan.

To order memorial trees or send flowers to the family in memory of Allan Stolz, please visit our flower store.