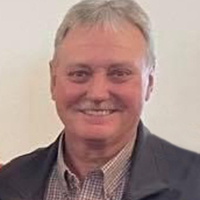 Allen was born on April 9, 1966, the son of Lester and Margaret (Knudston) Albaugh.  He was raised in Bismarck and graduated from Bismarck High School in 1985.  As a teenager, he loved to ride horseback and was a member of the Bismarck Junior Mounted Police. Following graduation, Allen took on a few jobs, including managing some apartments, did some autobody work and in 1986 went to work for McDonalds in maintenance.  This job turned into a lifetime of working for McDonalds servicing their equipment at different locations and he became a part of the McDonalds family.

In 1996, he established Al’s Striping and Sealing, specializing in commercial and residential asphalt maintenance, parking lot design and more. This business became a family affair, as he took Karissa and Kolton with him as much as he could. Through this time spent with their dad, they learned not only the large aspects of the business, but he taught them how every tool worked and made sure they were put away after every use. Allen took pride in keeping a clean shop.  Al continued to work at both McDonalds and Al’s Striping and Sealing until the time of his death.

Allen passed on several of his favorite hobbies to his kids, including snowmobiling, dirt biking and watching his favorite football team, the Dallas Cowboys. He enjoyed camping with friends and family and had a soft spot for his dogs, Bear and Bella, who got to go for many rides during the day. At one time, Allen did some hobby farming with his dad, just north of Bismarck, on land that is now within the city limits.

A true jack of all trades, he could fix almost anything in his shop.  Allen always had a seat ready and time for a friend to stop in for a visit.

He was preceded in death by his grandparents; mother-in-law, Dorothy Sayler; father-in-law, Richard Schauer and furry friends, Katie, Duke and Duke Jr.

To order memorial trees or send flowers to the family in memory of Allen Albaugh, please visit our flower store.