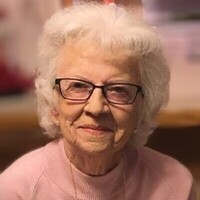 Almora Loretta Borner passed away peacefully in Colorado after moving there in 2021 to be closer to her family.  She will be dearly missed by those who she touched years ago and those who she met and touched while in Colorado.  Almora was born on February 18, 1931, to John C. and Martha Waltz in McCluskey, ND, and grew up on a farm near Goodrich where she attended school and graduated from Goodrich High School in 1948.  She spoke often about growing up on the farm with her three sisters (Norma, Norline and Ardella) and no brothers to do the chores.  The four girls were truly a shining example of sisterhood, hard work, determination and independence.

Almora moved to Bismarck after graduation to work at the State Auditor’s Office where she spent her career and retired after 45 years.   She made many life-long friends at the State Capitol and her commitment to the same job for an entire career is how she lived her life; dedicated and committed to everyone and everything that was important to her.  On a blind date, Almora met Al W. Borner.  They were married in June 1953 and were blessed with 60 years together prior to Al’s passing in July 2013.  They had one child, Bonita Beth (Borner) Sonderby.

After retiring, Almora’s interests focused more on her garden and flowers, travels and being an Arizona snow bird.  She was very creative and spent a lot of time doing ceramics.  She enjoyed making the same item often multiple times to give to her sisters, friends and always made sure there was two of everything for her granddaughters, Nicole Ordis (Sonderby) Santistevan and Shelbey Almora (Sonderby) Royal.  Al and Almora attended McCabe United Methodist Church and after Al’s passing in 2013, Almora initially spent more time with her ladies’ circle friends.  During that time, she continued to enjoy entertaining and helping where needed at church.   She was encouraging to everyone and was often heard saying that we should “look up, not down.”

While Almora wasn’t convinced that she needed to leave Bismarck and move to Colorado, she adapted quickly and began to interact with her new friends while participating in outings, crafts, painting, exercise and sing-alongs.  She was able to spend time with her three great-grandsons and was happy every time they came to visit.   The staff at Pine Grove will tell you that she told them repeatedly that “things could be worser” and was always happy to see them.  Her favorite greeting was to say “Hello Snookie” and to give praise for everything that they did for her.

Almora is survived by her daughter, Bonita (Clark) Sonderbyl; granddaughters, Nicole (Russell) Santisteven and Shelbey (Joseph) Royal; and three great-grandsons, Behr, Saiben and Ellis Royal. She was preceded in death by her parents, sisters and husband.

Condolences can be sent to the family at 22531 East Long Drive, Aurora, CO  80016.  In lieu of flowers, the family requests donations to the ND Veterans Cemetery or a charity of individual choice.

Public visitation will be held from 6 to 7 p.m. Thursday, Oct. 20 at Eastgate Funeral Service, Bismarck.

To order memorial trees or send flowers to the family in memory of Almora L. Borner, please visit our flower store.