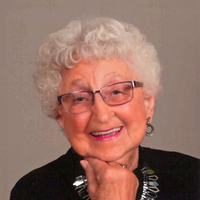 She was Baptized and Confirmed in German at the Zion Lutheran Church in Beulah and went to school in Beulah until the tenth grade. After ninth grade she got a job with Capital Laundry Cleaners in Bismarck for a number of years and lived with her Aunt Martha Hilz until her aunt became Mrs. Emil Wetzel that’s when she moved back to Beulah and went to work for Goldad Cleaners for quite some time.

Alta met the love of her life, Larry Schramm, in 1950 while roller skating one night at the Sheep Shed Pavilion in Beulah. On March 1, 1953, Alta and Larry were married at the Zion Lutheran Church in Beulah. They started their life on the Schramm Family Farm located north of Hazen. A year later they moved to a larger farm just south of Bismarck, on highway 1804 where they started up a Dairy & Beef business.

Besides the normal chores of keeping up with the housework, Alta managed to raise two boys, Ross and Randy and tended to the milking of the cows, feeding and raising chickens and pigs and range cattle.

Even though working on the farm was a lot of hard work she always found the energy to entertain, and cooked many German dishes for her family and friends. Alta was also known in the farming community for her many famous baked goods, like her homemade fudge, caramel rolls, cookies, brownies and especially her homemade chocolate cake.

Alta was known to all her neighbors around the farm as “the stylish lady” and was always ready to go somewhere when needed or to play cards with friends.

She ran a Post Office Sub Station called Livona Rural Station where she sorted the mail and money orders that were delivered by the mail carrier driver.  The neighbors would come in to get their mail and she would always have coffee and cookies ready sometimes even caramel rolls: no one ever went away hungry. She ran the postal station from 1957 until July 1, 1993, that’s when the post office sorting got moved to Bismarck by the postal service.

Alta was a member of the Prairie Homemakers Club for over thirty years which consisted of around 15 local members, and she received a pin for 25 years of being a member.

In 1982, after many years of running the dairy farm, Alta and her husband decided to retire from milking and do some traveling. They then worked selling many different products at Flea Market shows in AZ, especially at Quartzsite and at the Minot State Fair. In 2004 they decided to just enjoy the winter months down in Yuma, AZ in the park model home they purchased where Alta enjoyed taking care of her grapefruit tree in the front yard and her lemon tree in the back yard. She made many special friendships and was very active in the warm weather.

In 2009 Alta and Larry moved into their condo in north Bismarck where Alta enjoyed baking again for her neighbors in the condo unit. In January of 2017 Alta went on a family trip for ten days to Playa Del Carmen, Mexico. She got to enjoy walking along the beach and putting her feet in sand and the feel of the ocean waves lapping at her feet. She also enjoyed walking thru the lazy river water that was just down the steps right outside her resort room.

In 2018 Alta also went on a small family trip to Las Vegas where she was surprised by her son Randy to front row seats to see Wayne Newton in concert! She was so excited and enjoyed every moment, especially meeting him in person. She went on a few mystery trips with her sister Ilene, like, the Spam Museum in Austin, Mn, a river ride and brewery in Okoboji, IA, a winery in Dickinson, and twice to SD: she came back with many photos and a lot to talk about.

Alta was preceded in death by her husband, Larry Schramm; her parents, William (Bill) and Christine Hilz; one brother, Ervin Hilz, and many other loving family members that have entered Heaven before her.

She will be laid to rest at Glencoe Cemetery next to her family farm.

A livestream of the service will be available for viewing when the service starts on Zion Lutheran's website:https://www.zionbismarck.org/

To order memorial trees or send flowers to the family in memory of Alta E. Schramm, please visit our flower store.