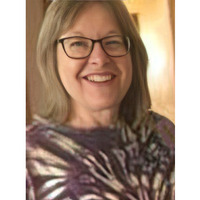 Althea “Tia” Apolonia Maliscke was born April 25, 1961, to John and Katherine (Kromarek) Maliscke in Bowman, ND. She attended elementary through high school in Bowman, graduating in 1980. After high school, Althea attended cosmetology school in Bismarck, ND. She soon found that cosmetology was not her style. Tia had different jobs in Bismarck but found her work home at the Bismarck K-Mart. Althea worked for K-Mart for almost 30 years – she started when they still had the K-Mart cafeteria! She stayed with the Bismarck store until it closed in 2020. Althea remained in touch with several of her former K-Mart co-workers, they were very important to her. After K-Mart closed Althea began a new career at Dan’s Supermarket.

Shortly after moving to Bismarck, Althea met her fiancé, Dale Hoffman. Althea and Dale spent 35 years together before Dale’s unexpected passing in 2015. Althea (or Fred, as Dale called her) and Dale liked to spend time fishing on the river, doing yard work, gardening, and canning the produce. They loved spending time with friends and watching mixed martial arts (MMA). Althea’s favorite fighter was Conor McGregor. Althea and Dale traveled when possible; one of their favorite places to travel to was the west coast to visit Dale’s relatives. She always talked about how she loved the seafood from the coast, especially the steamer clams.

Althea loved her family. Her family called her Tia, which is kind of funny because “tía” in Spanish means “aunt.” Tia never had children of her own, but she was the best aunt. She always remembered birthdays and made many trips across the state of North Dakota, spending holidays in Bowman and attending events for nieces and nephews in Fargo. She even made a trip to Redmond, Oregon for a graduation party! Tia will be remembered for her smile, her light, her love, and her enthusiasm for holidays.

Althea had a favorite feathered companion, Packers, a Nanday Conure (parakeet). When Althea was home, Packers was with her – indoors, outdoors or snuggled under a blanket on Althea's lap. Packers had two strokes, but Althea nursed her back to health both times. They didn’t travel together often, but her family remembers a very special Christmas when Packers made the trip to Bowman and jammed along to Christmas classics like "Jingle Bells.”

Althea survived lung cancer in 2018, but in April of 2022, she was diagnosed with a cancerous brain tumor. She decided to try radiation treatments at Mayo Clinic in Rochester, MN. One of Althea’s siblings tried to be with her during most of the five-and-a-half-week stay at Mayo. She received many calls from her far away family members during that time, all to share their love and hope with her. Unfortunately, a remission from the second bout of cancer was not to be. She passed into the open, loving arms of God on May 31, 2022, with her brother Gabriel by her side.

Althea was preceded in death by her grandparents, her father John Maliscke, and her life partner, Dale.

She is survived by her mother Katherine Maliscke (Bowman, ND); her siblings, Ron Kromarek (Bowman, ND) his children, Blaine, Tami, and Lisa; Gabriel Maliscke (Fargo, ND), his children Nathan, Sophia, and Mollie; Cynthia (Robin) Jensen (Wheatland, ND), their children, Eli, Emma, and Isaac; Emily (Scott) Shear (Bowman, ND), son, Ryan. She is also survived by one miracle great niece, Ora Rae – daughter of Nathan and Nadia Maliscke. We love her and know she has found peace and her heavenly family in the Kingdom of God.

To order memorial trees or send flowers to the family in memory of Althea "Tia" Maliscke, please visit our flower store.