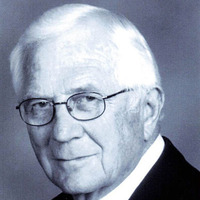 Funeral services will be held at 10:30 a.m., Monday, February 28 at Good Shepherd Lutheran Church, 106, Osage Ave, Bismarck. Visitation will be held Sunday from 2-4 p.m. with a with a prayer service starting at 4 at Parkway Funeral Service, 2330 Tyler Parkway, Bismarck. Interment at 10 a.m., Tuesday, March 1 at Sunset Memorial Gardens, Bismarck.

A livestream of the service will be available for viewing at the Good Shepherd's Facebook page: https://www.facebook.com/goodshepherdbismarck

Alvin J. Wittmaier was born July 3, 1929 northwest of Beulah to Carl and Leah (Kiehlbauch) Wittmaier. He graduated from Beulah High School in 1947. He studied engineering at the University of North Dakota and was a graduate of the Executive Program of the Graduate School of Business of Stanford University.

He served in the U.S. Army during the Korean Conflict and was united in marriage to Elaine Stickney of Beulah on June 9, 1951 in San Francisco California.

After being discharged from the army in 1953 he began his work career as a gas engineer in Shelby, Montana. In 1955, he moved to Beulah and worked as a mine engineer for Knife River Coal Mining Company. In 1960, he was transferred to Bismarck as the general Superintendent for Knife River Coal Mining Company. In May, 1983, he was elected President and Chief Executive Officer. During 1987 he left his tenure with Knife River to join another subsidiary of MDU Resources Group. Williston Basin Interstate Pipeline as their President and Chief Executive Officer- a position he held until he retired in May, 1990.

Alvin J. “Sparky” was a charter member of Good Shepherd Lutheran Church, The American Institute of Mining Engineers, U.N.D. Bureau of Mines Advisory Board, Board of Directors of Interstate Natural Gas Association of America, Foundation Board and Board of Directors of Missouri Slope Lutheran Car Center, Bureau of Land Management Dickinson Advisory Council and served as President of N.D. Lignite Council and Montana Coal Council.

He enjoyed his family friends. His hobby of woodworking gave us countless pieces of oak furniture. His piece of Heaven was their lake cabin in northern Minnesota.

Missouri Lutheran Care Center has been his home since July 2017. We would like to thank the staff for the wonderful care given to him.

Memorials may be given to Good Shepherd Lutheran Church or to a charity of the donor’s choice.

To order memorial trees or send flowers to the family in memory of Alvin J. Wittmaier, please visit our flower store.