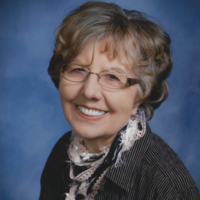 Visitation will be held from 5 to 7 p.m. Thursday at Parkway Funeral Service, 2330 Tyler Pkwy, Bismarck. A vigil will begin at 7 p.m.

Alvina was born to Aloysius and Regina (Schwengler) Gross on June 12, 1937. She was a student at Napoleon elementary, middle, and high school and was a proud member of the class of 1955.

In 1957 she attended Ellendale Normal and Industrial College where she earned an associate degree in Teaching. Upon completion of her degree, she taught Elementary School and then began working for the State of North Dakota in Bismarck. On September 26, 1961 she was married in St. Anthony’s Church, Napoleon, to Bruce Campbell, an Air Force sergeant from Cable, Wisconsin. Over nearly twenty years she and her family traveled across the world in places as far flung as Japan, England, and the Azores, Portugal. She was an attentive and loving mother, who eased the many moves the family made.

She settled in Bismarck in 1978 where she worked as a teacher at the Adult Learning Center and at the Early Childhood Learning Center. In addition, she was the Assistant Manager and Activity Director at the Camlu Retirement Apartments as well as Gresham Manor. In later life, she managed the St. Mary’s Cemetery and volunteered as a caregiver at a number of senior facilities in Bismarck. She was a Benedictine oblate and an active member of St. Mary’s in Bismarck.

A devoted mother, sister and friend, she will be missed immeasurably.

Alvina was preceded in death by her parents, Aloysius and Regina Gross; her twin brother, Alvin Gross, along with her younger brother, Patrick Gross.

To order memorial trees or send flowers to the family in memory of Alvina Campbell, please visit our flower store.