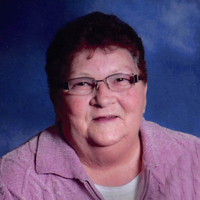 Funeral services will be 2 p.m. Saturday, June 11 at Parkway Funeral Service, 2330 Tyler Parkway, Bismarck.  Visitation will be held one hour prior to the service.

Angeline Cecilia was born on August 1, 1934, to Simon and Cecilia (Werlinger) Ell in Linton.  She was raised and educated in Linton. On November 22, 1954, she married Edmer “Eddy” Murschel at St. Mary’s Church, Bismarck. They made their first home in Bismarck before moving to a few places, including Elgin and Fargo before returning to Bismarck. Together, Angie and Eddy raised five children, Cary, Kevin, Michael, Pamela and Brenda. Angie was a stay-at-home mom until their youngest started school.  She then worked at several different places throughout the years, starting in food service at Albrechts Frozen Food, Schultz Creamery, Village Inn and the Elks.  Her last place of employment was at Missouri Slope, where she was the assistant housekeeping supervisor.

Retirement brought the purchase of a motor home, which took them to Arizona for many winters. Eddy and Angie loved to dance and would often attend dance jamborees, dancing from sun-up to sun-down. She was a member of St. Mary’s Catholic Church. She was a good baker and cook and enjoyed doing jigsaw and cross word puzzles. Grandma Ang had a special bond with her granddaughter Melanie.  They spent lots of time together cooking, playing games and learning from each other.

She was preceded in death by her husband of 67 years, Eddy; her parents; siblings, Regina Bender, Anton “Tony” Ell, Mike Ell and Leona Reuer.

To order memorial trees or send flowers to the family in memory of Angeline Murschel, please visit our flower store.