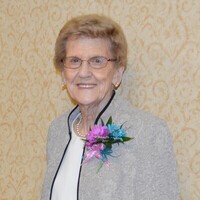 Ann Glanville, 103, passed away peacefully on Dec. 19, 2020.  There will be a private family service at her church, the Bismarck United Church of Christ, complying with the pandemic guidelines.

Ann, along with her twin sister, were born to Julia and William Gellner on July 25, 1917 near Arena.  Ann attended schools in Phoenix Township, Arena and Wing.  She played high school basketball in Arena and Wing.  The Arena “Terrors,” where she, her two sisters and a cousin were four of the main five.  She was so proud that they won the championship in their division.  Ann graduated from Wing High School in 1937.  The day after her graduation she went west to California, like many people did in the 30’s.  While in California, Ann experienced life in a big city, an afternoon on the beach and saw the newly completed Golden Gate Bridge. Although this was all exciting, this farm girl was lonesome.  In the fall of that year, Ann returned to North Dakota to attend Valley City Teachers College.  Ann taught four years in country schools located in Ghylin, Richfield and Hazelgrove Townships.

On Sept. 27, 1941 Ann married Dean Glanville.  Ann and Dean farmed and ranched north of Wing where they raised their four daughters. Ann and Dean had many lifelong friends. They enjoyed multiple road trips to Minnesota, South Dakota and Canada where Ann was always the navigator.

Dean passed away at the age of 56 in Oct. 1973. Ann moved to Bismarck the year following.  She faithfully followed the news and was very interested in politics.  Ann loved to read, do the daily crossword puzzle, play cards and dominoes and she crocheted many lap robes for the local nursing homes.  She was also active in various community activities, often serving as a volunteer leader.

She was preceded in death by her husband of thirty-two years, Dean; her parents; brother, Martin; and sisters Annette, Alma, Edna and Carolyn.

In lieu of flowers, the family requests memorials to Wing Cemetery, the United Church of Christ of Bismarck or your charity of choice.

To order memorial trees or send flowers to the family in memory of Ann Glanville, please visit our flower store.