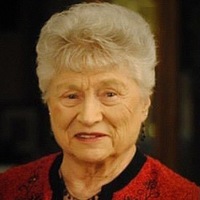 Funeral Mass will be held at 10:30 a.m., Friday, May 7, at Church of Ascension, Bismarck. Visitation will be held from 5-7 p.m., Thursday, May 6 at Parkway Funeral Service, Bismarck with a rosary/vigil service starting at 6:45. Interment will be at the North Dakota Veterans Cemetery, Mandan.

Ann was born August 1st, 1927 in Esmond, ND. She was raised on the family farm by her parents Daniel C. Bachmeier and Theresa (Sanders) Bachmeier. She was one of the youngest of 14 children. She attended Rich Valley School through the eighth grade, which was followed by two years at St. Francis Academy in Hankinson. The family then relocated to Devils Lake where she graduated from St. Mary’s Academy in 1945. In 1947, Ann completed her training and graduated from the New York Hairdressing Academy in Fargo, ND. For the first three years of her career she was employed by Bechtel’s Beauty Salon in Devils Lake. She then opened her own salon, Ann’s Beauty Shop, where she worked until she retired and moved to Bismarck in 1989.

Ann married Raymond C. Larson on July 8, 1950. They enjoyed 67 years of dancing, golfing, playing cards and traveling together. Ann excelled in anything she set her mind to and won many golf tournaments in her time. They had five children together; Ronald, Wayne, Shirley, Charles and Steven.

Family was everything to Ann. Her children, grandchildren and great-grandchildren always knew they had their biggest fan in the stands when Ann would attend their sporting or school events. She wrapped the people she loved in homemade quilts. Her fried chicken and baked goods were legendary and will be missed by the entire family. Her greatest legacy though will be that of faith and family. Ann was happiest when she had all her family gathered around the dining room table.

She was preceded in death by her husband, Ray, her son Charles; her sisters Mary, Cathryn, and Irene; her brothers; John, Walter, Albert and Leonard.

To order memorial trees or send flowers to the family in memory of Ann Larson, please visit our flower store.