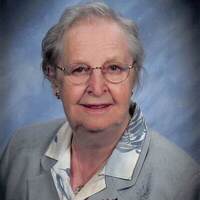 A service livestream will be available starting at the time of the service at https://www.facebook.com/CorpusBismarck/ or at https://www.corpuschristibismarck.com

Interment will be at St. Boniface Cemetery, Kintyre, N.D.

Visitation will be held from 5 to 7 p.m. Monday with a rosary/vigil service beginning at 7 p.m. at Parkway Funeral Service, 2330 Tyler Pkwy, Bismarck.

Anna Mary was born on February 6, 1924 in rural Emmons County near Linton, ND to Joseph and Veronika (Wangler) Vetter. The second oldest of 13 children, she attended country school only through grade six then became a “hired girl” for family and neighbors.

On October 28, 1948 she was united in marriage to Frank Fettig at St. Joseph’s Catholic Church, rural Linton. Together, they farmed with Frank’s parents for eight years until Frank’s family found other endeavors. They were blessed with seven children.

In 1986, Ann, Frank and Joe moved to Napoleon and a short time later, relocated to Bismarck where Ann provided babysitting services to her grandchildren.

She enjoyed dancing, playing cards, listening to old time music, enjoying meals at the Senior Center and especially looked forward to the annual Fourth of July Celebration at Vetterville along with the annual Christmas Eve celebrations with her children, grandchildren and great-grandchildren.  She made Christmas fun and told stories of her Christmases as a child. Ann taught more than one grandchild to dance the polka.

Ann was a kind and generous person. Her faith remained important to her.  She always made sure she provided lunch when someone visited.  When her children, grandchildren or great-grandchildren would visit she always sent along a gift of money, pack of gum or homemade bread and buns. No one ever went hungry.

At age 95, she embroidered dish towels as well as painting over 200 sets of dish towels. She loved giving these gifts as well as a remembrance to her family.

In 2014, Ann became a resident of Marillac Manor whereby she attended daily mass and enjoyed fellowship with her siblings Wendelin, John, Elizabeth, Catherine and Christine.

She looked forward to their afternoon snack of an ice cream cone or ice cream bar.

On February 6, 2020 Ann became a resident of St. Vincent’s Care Center until her passing.

To order memorial trees or send flowers to the family in memory of Anna Mary Fettig, please visit our flower store.