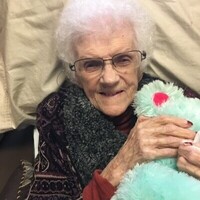 Burial will be held at Calvary Cemetery, Langdon.

Anna was born on Oct. 13, 1918 in the First Trading Post in Walhalla to Theodore and Mary Koropatnicki. She came from a family of nine.  She attended school through the eighth grade and was needed on the family farm to help with chores. At 18, Anna worked for a short time at Cox’s Bakery in LeRoy before going into business with her brother, Bill. They rented a little house in Olga and used a portion of it for their store. They sold milk and butter from local farmers. Bill and Anna later bought bakery goods and sold them. There she met Harvey Plante whose parents had a gas station next door. They became friends and were later married.

Harvey and Anna had six children, Gary (Mercedes), Leo, Judy (Tony), Jim (Lynn), Ronnie (Mary) and Penny Ann (Rick). They owned and farmed four miles north of Langdon. After Harvey passed away in 1969, Anna sold Avon, Sarah Coventry and Tiara. She later started a wig business in her home. She traveled to Mexico and purchased Mexican pottery, which was a big hit. After that, she decided to open an antique replica shop in Langdon called Years Gone By.

Anna later moved to Bismarck to be closer to family. She bought a camper and went to Arizona for a few winters.

She was active in the Eagle’s Club, bowling and BONCO. Anna loved to entertain, bake and decorate cakes. She also enjoyed dying Easter eggs.

We want to thank mom’s good friend, Asema, for her great care.

She was preceded in death by her husband, Harvey; son, Gary; one sister; and four brothers.

She was a classy lady with a whole lot of faith. Anna was often found with a rosary in her hand and singing a song.

To order memorial trees or send flowers to the family in memory of Anna Plante, please visit our flower store.