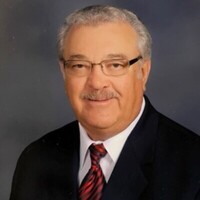 Visitation will be held from 5-7PM, with a rosary/vigil service starting at 7:00PM, Thursday, October 6, 2022, at Parkway Funeral Service, 2330 Tyler Parkway, Bismarck.  Visitation will continue at the church one hour prior to service.

Tony was born on February 26, 1942, to Joseph and Veronika Vetter, the twelfth child of 13.  He grew up on the family farm and attended country school until 8th grade.  He then continued his education at Assumption Abbey High School in Richardton, ND. Upon graduating, he attended Dickinson State University as a music major. After hearing about a great business professor, he moved to Bismarck to attend Bismarck Junior College. He paid his way by playing piano for weddings and accordion for parties.

His 17 year career with Firestone, which started in Bismarck, took him to Aberdeen, Fargo, Thief River Falls, Moorhead and eventually back to Bismarck. While in Aberdeen, a coworker set him up on a blind date with Celia (Dehne). They were united in marriage on June 6, 1964.  In 1977, Tony decided to start Northwest Tire in Dickinson, ND with his nephew Al Wald.  They quickly became a two-store operation and Tony moved the family to Bowman, ND where they lived for 19 years.  When Tony and Celia moved back to Bismarck, the business had grown to eight locations and today, will soon be 25.  His ability to plan and look to the future, along with the help of many great employees, has led to the success and continued growth of Northwest Tire.

Tony and Celia were not all about business though.  They were very involved in Marriage Encounter, leading weekends and training at the diocesan level, were passionate about supporting Catholic education and religious vocations, as well as making sure to enjoy time with their kids snowmobiling, boating and camping.  He made sure to instill the importance of family by always attending the annual Fourth of July Vetterville reunion on the farm where he grew up.  He enjoyed catching up with his nieces and nephews.

Tony enjoyed fishing and traveling and especially if he traveled to fish!  Some of his favorite trips were traveling to Canada with his siblings and friends that created stories that will last forever. He and Celia traveled to all 50 states and were fortunate to visit numerous countries.  He loved to travel even if it was just a drive around town.

He and Celia always enjoyed watching their children and later their grandchildren participating in their various activities. It gave him great joy that all seven of his grandchildren were able to come together and be with him in his last week.

To order memorial trees or send flowers to the family in memory of Anthony "Tony" Vetter, please visit our flower store.