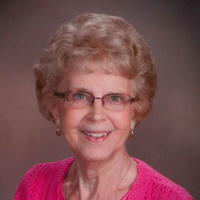 Arlene M. Olson, 91, Bismarck, traveled to her heavenly home on her birthday, Sept. 7, 2021.  Funeral services will be held 11:30 a.m., Monday, Sept. 13 at Good Shepherd Lutheran Church, 106 Osage Ave., Bismarck.  A service livestream will be available on the church’s Facebook page.

A visitation will be held from 5 to 7 p.m., Sunday at Eastgate Funeral Service, 2302 E. Divide Ave., Bismarck.

Arlene (Aune) Olson was born at her grandparent Myhre’s farm near Sanborn, on September 7, 1930. She was the first of four children born to Arne and Bessie (Myhre) Aune. Arlene grew up on farms in the Valley City area, often helping with farm chores. She was good at milking the cows, so much so that she claimed her dad had to buy a milk machine to replace her when she left home. She would also help in the kitchen with household duties. As the eldest, she often was asked to look after the two youngest siblings, Beverly and Robert.

Her grade school years were at rural schools. After her first eight years of school, she went to Valley City High School. Arlene was always small and during her freshman year she was asked to play a child in the Senior play, as she was the smallest student in her school. She recalled that she had no lines to say, so it was an easy part to play. She ended up transferring to College High School in Valley City for her senior year. She graduated in 1948.

Arlene worked for Woolworth Dime Store for a while after graduation, until she was hired by Northwestern Bell to be a telephone operator. In order to get the job, she needed to sit at the switchboard and demonstrate that she could even reach to the top of the switch board.

She met Jocelyn “Joe” Olson at a dance, and they married in 1950. He was drafted into the service and deployed to Korea during the Conflict. Paulette was born while Joe was in the service. Joe was wounded and disabled while in Korea. After his return, they moved to NDSU to finish his degree in 1952. She recalled living in the married student housing at NDSU, which were old barracks. Steven was born while they were there. After some time in Minneapolis, they returned to Fargo. They lived in North Fargo when Peggy was born.

Always ambitious, Arlene took a typing course during their time in Minneapolis. After all her children were in school, she went back to school herself. She attended Bismarck Junior College for a year taking two business courses. Then she started her working career. She worked part-time at the local Lucas’ Department for five years. Then she worked for 21 years at the Bank of North Dakota. She enjoyed her years working at the bank. She had the opportunity to advance through the ranks to become an officer in the Student Loan Department. During those years, she kept taking classes to improve her knowledge in banking.

She was a member of Good Shepherd Lutheran Church, Bismarck Optimist Club, Capital City Quilters, PTAG and the Sons of Norway Sverdrup Lodge. As a quilter, she crafted quilts for each of her children, grandchildren and great-grandchildren.

She was preceded in death by her husband, Jocelyn Olson; parents, Arne and Bessie Aune; two brothers, Andrew and Robert Aune; and grandson, Patton Hill.

She summed up her later life with these words, “After retiring from the bank at age 62, I have had a busy life doing the things I was looking forward to doing and the many things to do that I did not know about. Some of my interests are family, church, quilting, rug hooking, needlework, volunteering and reading. It has been an enjoyable time. I have been blessed with a wonderful family, friends, and health.

Arlene died on her birthday at St. Gabriel’s Community after a battle with Leukemia.

Memorials may be made to the donor’s choice.

To order memorial trees or send flowers to the family in memory of Arlene Olson, please visit our flower store.