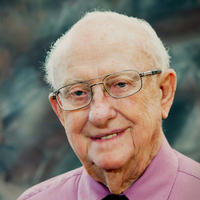 Arthur Hummel, 91, Bismarck formerly of Mott, went home to be with the Lord on January 1, 2022, passing away at Sanford Hospital, Bismarck.

Visitation will be held from 6 to 7 p.m., Friday at Parkway Funeral Service, Bismarck, with a prayer service beginning at 7 p.m.

Arthur Hummel was born January 16, 1930 to Carolina and John Hummel Sr, in Mott. Arthur graduated from Mott Public School in 1948. He attended three years of college, first at Chicago Evangelical Institute, Chicago, Illinois, and then at Kletzing College at Oskaloosa, Iowa, where he majored in choral music.  He played trumpet in a brass trio, sang in a men’s quartet and performed with them as guest artists in numerous churches in Chicago. While attending school, Arthur worked for the First National Bank in downtown Chicago.

Arthur married Marilyn Grove January 20, 1951 in Wakarusa, Indiana. Arthur and Marilyn moved to rural Mott in 1951 at the request of his father to take over the farm.  There they raised seven children and grew grain crops and raised livestock until he retired in 1978. Arthur continued to custom farm for other farmers until they moved to Bismarck in 1982.

While living on the farm in Mott, Arthur was very active in Zoar Congregational Church as  church Choir Director, directing many Christmas and Easter cantatas, served as a Sunday School teacher, and served on the church board. Arthur served in leadership and selection of many pastors over the years, was very active in the Conservative  Congregational Christian Conference, called Great Plains Fellowship, in ND, and served in the Gideons for many years.

In 1982 Arthur and Marilyn moved to Bismarck where Art began working in maintenance at Kirkwood Park Apartments.  Soon Arthur and Marilyn became managers of the apartment complex until his retirement at age 62. They enjoyed traveling with the Good Sam Club in their RV for numerous years.

We are grateful for the loving care Dad received at Valley View Heights, at Evergreen by Peg and Erv Schadler and at Haycreek Lodge, Bismarck , ND.  God provided countless blessings to our family through are loving father. He dearly loved his children, grandchildren and great- grandchildren. Thank you all for being part of Arthur’s life and for honoring him in this celebration of his life.

In lieu of flowers, memorials may be given to STEER, INC, Bismarck, or Zoar Congregational Church, Mott.

To order memorial trees or send flowers to the family in memory of Arthur Hummel, please visit our flower store.