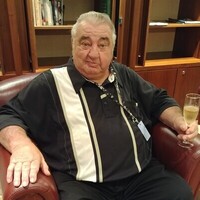 Visitation will take place an hour before the service starts.

Benjamin “Penny” Cyrus Hojian was born June 27, 1937, in Dawson, ND to Margarette (Tjomsland) and Harry Hojian. He attended school in Dawson until approximately the 6th grade, at which time he went to work for area farmers. On September 29, 1957, Penny married Eileen Morlock (Pettibone) and together they welcomed three sons, Marty, Ricky, Jeffrey and one daughter, Jody. The family lived in Dawson while Penny owned and operated his filling station. Penny later sold the station and in 1967 the family moved to Steele. Penny farmed, sold wool and worked at Tim’s Texaco. Penny and Eileen divorced in February of 1976. Penny moved to Bismarck and went to work for Dick’s Texaco and later FM Forklift.  Penny met Lorraine (Zelmer) Paul and they married on June 30, 1979. They made their home in Bismarck. Penny opened his own forklift sales and service shop, Penny’s Lift Truck Repair. He was fortunate to have his wife, stepson, John Paul and eventually his son, Rick, work with him until he later retired and sold the business.

Penny was always interested in working with his hands and fixing or creating something. His mind was always going and coming up with new ideas. He was the original repurposer and the king of barter. He could start his barter with a battery and end up with a forklift. Penny always had time to help out and would “be right over.” If he had it, he shared it with you, with a smile and a joke. He always said, “if you treat people right, they’ll take care of you.” Penny found great joy spending time with his family and was very proud of them. He loved life and enjoyed meeting new people and had the gift of gab. He could be found at breakfast, ordering an omelet and a cup of coffee and hooking somebody with his newest story. He had a flamboyant dressing style and the brighter or louder it was, the more he loved it. What started as a joke with his Zubaz later became his trademark and you always knew Penny by his pants. Penny’s creative nature kept him busy decorating Lorraine’s garden; making growing racks, welding iron art or building gazebos. After retirement his paradise was the Lake Isabel cabin. You could find him happily building his “yellow brick road,” raised bed gardens or putting in yet another birdhouse for Lorraine. Many memories were made at the cabin, including the Labor Day tradition of the chili and bread fry. A very memorable event was the 50s party where Penny appeared as Elvis, white jumpsuit and all.

After Lorraine passed, he expressed a desire to move home to Dawson. His new home provided a huge garage where he could continue his iron art. He was most proud of his “zoo” in Dawson, which eventually expanded to include old farm machinery and even a “ship.”

Thank you to all of the wonderful friends that helped Penny fulfill his dream of the “zoo” and to the very kind Hospice staff.

In lieu of flowers, the family asks that you please consider a donation to the Dakota Zoo in Bismarck.

To order memorial trees or send flowers to the family in memory of Benjamin Hojian, please visit our flower store.