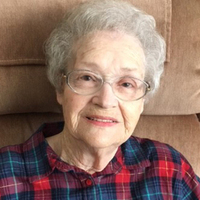 Bernadette Engelhard, 89, passed away after a long battle with Alzheimer’s Disease May 13, 2021 at home with her loving husband of 66 years and family by her side. Mass of Christian burial will be held 8:45 a.m. Wednesday, May 19 at Church of Corpus Christi, 1919 N 2nd St., Bismarck. A service livestream will be available on the church’s Facebook page: https://www.facebook.com/CorpusBismarck/

Visitation will be held 5 to 7 p.m. Tuesday at Eastgate Funeral Service, 2302 E Divide Ave., Bismarck. A rosary/vigil service will begin at 7 p.m.

Burial will be held at North Dakota Veterans Cemetery, Mandan.

Bernadette was born May 8, 1932 in the Tarsus community of Bottineau County. She was the daughter of Bernard and Alice (Greenwood) Hamilton, the fifth of eight living children. Looking back on her childhood life in the Tarsus community, they were very happy children, not realizing how bad things really were in the 1930’s depression. As a family, they played cards, listened to the radio (because the TV had not been invented yet), played tag, ring-around-the-rosie and hide-and-go-seek. They also made homemade swings and stilts. In the winters, they enjoyed sledding and skiing. It was self-entertainment – and FREE. To teach them responsibility, they had chores, such as dishes, wood chopping, hauling water from the well, feeding animals and bringing cows in for milking. They were always kept busy. Bernadette enjoyed being outside, whether it was mowing grass, shoveling snow or fishing. The fresh air was always worth the work.

She attended school in a one-room rural school for three years. The family then moved to Bottineau for one year, after which they moved to Minot, where she attended grade and Minot High schools.

While attending high school, she also worked for a short while at Trinity Hospital, taking care of food trays on the fifth floor. In 1948 she began working at Kresge’s 5 and 10, working there until after her marriage in 1954.

On July 22, 1954, Bernadette was united in marriage to Orvin Engelhard at St. Leo’s Catholic Church in Minot, after his return from service in Korea. They lived briefly in Minot. Later in 1954 they moved to the Glenburn area and began farming. While living at Glenburn, three daughters were born: Kathryn, Deborah and Lori.

In 1962, Orvin began employment with the Truck Regulatory Division of the ND Highway Department. In 1964 the family was transferred to Petersburg where they lived for one year. In 1965 they were transferred to Bismarck where their son, Brian, was born. Bernadette and Orvin have resided in Bismarck since.

Bernadette and Orvin were faithful members of the Church of Corpus Christi since 1965. She spent her life taking care of others.

They placed their priorities on Bernie being home for their children. She was a full-time housewife and very loving and caring mother. Besides cooking and cleaning, she was also a self-taught seamstress and sewed much of the girl’s clothes. She also sewed items for the St. Mary’s Carnival for many years. Bernadette always had baked goods around for friends and family, especially her beautifully decorated cookies around the holidays.

Bernie loved her grandchildren and great-grandchildren. They spent many hours together playing and enjoying each other’s company.

A special thank you to the Home Care Companions and Caring Edge Hospice for their excellent care.

To order memorial trees or send flowers to the family in memory of Bernadette Engelhard, please visit our flower store.