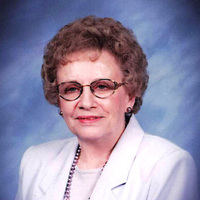 Bev was born on October 16, 1930 in Mitchell, South Dakota, the first of four to Henry and Ivy Metzger. Growing up during the drought and poverty of the dirty thirties, Bev attended rural school and graduated from Mt. Vernon South Dakota High School in 1948. She attended Black Hills Teachers College and taught in a rural school.

Bev worked for MDU in Rapid City where she met Robert “Bob” Grebner. They married on September 11, 1955. Two Children were born from this union, Sheila and Tom. They transferred to ND in 1967.

Bev enjoyed her time going to the casino with friends, being an avid bridge and pinochle player, and winning money playing Bingo. She passed on her passion for playing bingo and cards to her grandchildren, who she cherished spending time with. Her wits and love to discuss politics were kept strong until the very end.

Bev was preceded in death by her parents; husband; one sister and brother. Memorials can be made to the North Dakota Veterans Cemetery Foundation.

To order memorial trees or send flowers to the family in memory of Beverly Grebner, please visit our flower store.