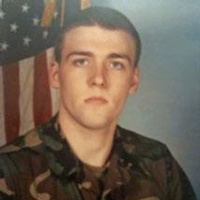 A memorial service will be held at 11:00 am Tuesday, April 9, at Bismarck Community Church, 1617 Michigan Ave., Bismarck, with Rev. Jared Lee and Chaplain David Johnson officiating. Cremation has taken place.

Bill was born on December 7, 1968, and raised by his grandparents in St. Louis, MO, where he and his brother Kevin grew up together and always remained close friends as well as brothers. As they would say, “It’s all about the brothers.” They grew up gaining a love of Elvis Presley from their grandfather; Elvis’s music was pure passion and joy for them. He and Kevin even have matching Elvis tattoos. Bill had numerous collectibles of Elvis and began Elvis impersonations called, “Bill Cobb’s Memories of Elvis” in 2006.

Bill moved to Illinois in 1987 where he enlisted in the Army on December 29, 1987, and later he and Lisa Henderson were married, and the couple moved to Germany, where Bill was stationed. When they returned home to Illinois, their son, Tyler was born in 1990 and their daughter, Amy was born in 1995.

Bill and Lois met in 2008 and became inseparable. Bill proposed to Lois on the steps of Graceland, later saying “I do” on November 13, 2010, at their home. When becoming a mixed family like the “Brady Bunch”, one of his favorite childhood tv shows, Bill gained two more children, Briann and Todd Miller, along with their fur baby, Presley. Shortly after their marriage the love birds traveled to South Carolina prior to their permanent residency in North Dakota.

They believed North Dakota to be the best adventure they went on; becoming co-workers and family to everyone who worked at RJR. Recently, the couple had purchased their dream home and couldn’t wait to start their own family farm.

Bill’s greatest joy beside his children were his three grandchildren and dog Presley. He loved being a grandpa and couldn’t wait for more grandchildren to help work on the farm. Friends recognized Bill as a true cowboy. He had a huge passion for sports, specifically the St. Louis Cardinals and Blues, as well as the local hockey teams, the Bismarck Bobcats and Mizzou Athletics.  Bill was a strong and loving man and father. With piercing blue eyes and a laugh everyone loved. He will be missed by so many, especially his children, grandchildren, and brother.

Bill was preceded in death by his grandfather, Keith B. Cobb; his grandmother, Vivian N. Cobb; and his sister, Michelle Cobb.

To order memorial trees or send flowers to the family in memory of Bill Cobb, please visit our flower store.