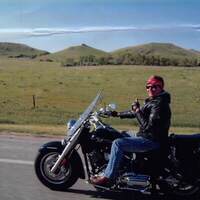 Blair was the son of Ernest and Cecelia (Azure) Thomas. He was born on November 17, 1956, in Belcourt, ND, and raised in Rolette where he attended school. He attended college at Mayville State, Mayville, ND. Afterwards he attended the Police Academy in Bismarck, where he became a Deputy Sheriff for Pierce County for 7 years. He then took a career with the North Dakota State Penitentiary for 6 years as a Correctional Officer. Then he went to work for the United Tribes in Bismarck as a Security Officer for 11 years. He retired from the Bureau of Reclamation in 2022.

Blair sure liked to spend time with his boys' hunting and playing sports. In 1992 he won a state championship playing state amateur baseball. Blair also enjoyed many softball years. His favorite pass time was riding motorcycles. There was no calling him during his games of the Chiefs, Spurs, or 60 minutes. Everyone will always remember Blair by his "Rice Soup" and his favorite song; Secret Agent Man.

Blair is survived by his wife, Margie; three sons, Justin (Jessica) of Bismarck, Jade of Lincoln, and Kyle of Bismarck; two grandsons, JD and Levi of Bismarck; four brothers, Brad of Belcourt, Bruce of Rolette, Jeff (Kelly) of Rolla, and Brian of Mandan; and two sisters, Corrine (Troy) Truebenbach of Aberdeen, SD, and Kim Thomas of Bismarck. He had many nephews and nieces.

To order memorial trees or send flowers to the family in memory of Blair Justin Thomas, please visit our flower store.