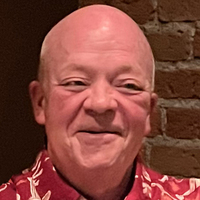 Brian Jon Peterson was a man with a big heart and even brighter smile. God called him home to be embraced with all the angels and saints on July 10, 2022, exactly one month after his 65th birthday, while he was enjoying a beautiful Sunday evening at his lake cabin after a beautiful day with friends and time with God on the porch.

A memorial service will be held at 2:00 pm on Monday, July 18, 2022 at McCabe United Methodist Church. Burial will follow at Fairview Cemetery. Brian was passionate about his friends, who became his second family, at the Elk’s Club. His family is pleased to invite all to celebrate his life at the Elk’s, at 4:00 pm, after the burial.

Brian was born on June 10, 1957 in Bismarck. He attended Bismarck High School and obtained his Bachelor’s of Science in Business Administration from the University of Mary. He proudly completed training in California to become a certified gemologist which inspired his successful career.

He used his creativity and hard-working skills to conduct business successfully for 48 years as owner of Knowles Jewelry and a pillar in the downtown community. He was looking forward to celebrating the 115th year of Knowles’ business at the same location, by retiring and spending time with his beloved family and friends.

Brian’s pride and joy were his children. He was so proud of them in all they are, particularly in their character, which they learned from Brian’s thoughtful and loving model of virtue and hard work. He was a creative man who enjoyed putting smiles on others’ faces, even if he was having a difficult day.

Brian had a servant’s heart. When he wasn’t working or dreaming of his next project, he spent his time serving his local community on multiple committees to uphold downtown Bismarck’s culture and structure; serving as Exalted Ruler of the Elk’s Club; and getting to know his neighbors by supporting local businesses.

He loved so big and always gave and spoke from the heart. His humility, laughter, and one liners will be missed by all.

He is survived by his three children and their spouses: McKenzie (Mick) & Brittany Peterson; Alexandra (Alex) & Aaron Beranek; TheaMarie (Thea) & Benjamin Mahrer; four beautiful grandchildren: Elilia, Brixton, Zinnia, Meika; the mother of his children, Judy Reile; his brother, Bruce (Tammy) Peterson and their children; and his sister, Deb (Pat) Haar, and their children.

He was preceded in death by his parents, Pete and Dee Peterson; and his nephew, Eric Haar.

His family would love for all to remember Brian with a smile, especially while having a Maker’s Mark on the rocks, glass of red wine, or a beautiful day outside; as Brian would say, “Enjoy Life.”

To order memorial trees or send flowers to the family in memory of Brian Peterson, please visit our flower store.