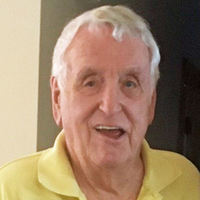 CW3 Buddy V. Mohler, U.S. Army Retired, was called home to be with loved ones on Sept. 7, 2021. Funeral services will be held 10:30 a.m. Tuesday, Sept. 14 at Parkway Funeral Service, 2330 Tyler Pkwy, Bismarck. Visitation will be held one hour prior at the funeral home.

Buddy will be interred in the North Dakota Veterans Cemetery with full Military Honors.

Buddy was born October 2, 1929, to W.J. “Bud” and Dorothy (Couch) Mohler in Grand Forks. He spent his childhood years in Grand Forks graduating from Grand Forks Central High School in 1947. Upon graduation he was employed by R. A. Scott Oil Co. as a warehouse foreman. He stayed there until July 1949 at which time the family moved to Bismarck, and he went to work for his father at Mohler Oil Co.

On July 1, 1951, he married Lois Amory in Bismarck. From this marriage, two children were born: Kathleen Ann “Kathie” and Richard James. The children had the privilege of being able to travel to all the duty stations except Korea. Lois passed away January 13, 1999.

He was drafted into the army in February 1951. In August 1951 he was with A Company 1st Battalion 7th Infantry Regiment 3rd Infantry Division serving in Korea. He was wounded in action the March 21, 1952, receiving the Purple Heart, Combat Infantry Badge and numerous other medals and ribbons. He was promoted to CWO in July 1967. He retired July 1976 from the Ordinance Corp. After 26 yrs. of service, 22 yrs. active and four active Reserve and National Guard.  He served two tours in Korea, three tours in Germany, one tour in Hawaii and numerous other stateside locations. Bud and Lois returned to Bismarck in 1984 to spend more time with family.

Buddy was a lifetime member of Trinity Lutheran Church, the Elks Lodge, VFW and AmVets.

On June 10, 2000, he married Lillian Stair of Newburg. They spent part of their time between Bismarck and Sun City Center, Florida. Lil passed away June 29, 2019.

He was preceded in death by his wives, Lois and Lillian; his parents; brother, James; and  brother-in-law, John Eckroth.

Please make memorials to the Veterans Cemetery or a charity of your choice.

To order memorial trees or send flowers to the family in memory of Buddy Mohler, please visit our flower store.