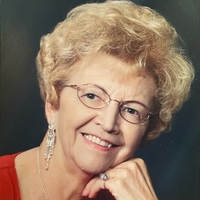 How does one condense, into a few short words, a life so beautifully lived?  A life so filled with the purpose of helping others that not even a novel could contain? Such was the life of our beloved mother, Carol (Carolina Wolf) Glatt. Mom passed from this life into the arms of our loving Father on April 14, 2021, at Elm Crest Manor in New Salem, ND. She was 88 years young. Though our hearts were broken that we were unable to be at her side when she took her last breath, we find comfort in knowing it was God Himself who held her hand and whispered to her in love: “well done, my good and faithful servant – enter into the gates of joy and find the rest you so greatly deserve.”

Carolina was the seventh of 12 children, born in Emmons County, near Linton, ND, to Mathias and Kenegunda (Vetter) Wolf.  She was baptized, confirmed and received her First Holy Communion in St. Michael’s Church. She grew up on the family farm and attended country school through the eighth grade. The family farm is where Mom learned the most about what was important to her – and that was FAMILY.  Most every Sunday was the day family came together, those gatherings included her parents, brothers and sisters, aunts, uncles and the many, many cousins who all lived within a mile or two of each other.

When she was 17, Mom met our dad, Lambert Glatt, at the local dance hall.  He polka’d and waltzed his way right into her heart and they married on October 24, 1950.  They made Bismarck their home for all 52 years of their marriage, until Lambert passed away in February of 2003. Together, they raised 12 children.  Mom was an amazing cook and a wonderful baker and she made the “best of the best” of all things German. She spoiled us kids with homemade carmel and cinammon rolls, breads and buns, kuchen, tea rings, cookies, knoephla soup, chicken noodle soup and then some. Many of Mom’s goodies were also lovingly sent to each house in the neighborhood.  The lovely aroma from Mom’s  kitchen wafted through our beloved 15th Street neighborhood many times throughout the years and everyone knew when it was bread day at the Glatt home.

Mom was grateful for the many things that can so often be taken for granted.  She washed thousands of plates and pots and pans through the years, but she would tell you she was happy to have running water and a sink in which to wash the dishes. When she had endless laundry to do (including hanging the clothes to dry and ironing almost all of it) she would be thankful she had an electric washer to help carry the load (pun intended).

One of Mom’s greatest gifts was her gift of hospitality.  She took the time to ask questions and she really knew how to listen. Her hospitality encompassed the whole person – not only did she feed them physically she fed them emotionally and spiritually, as well.

Mom’s faith was also of utmost importance to her.  She and Dad were charter members of the Church of St. Anne. She was a member of the St. Anne’s Women’s Guild and a lifetime member of the Catholic Daughters, which held a special place in her heart.  Mom volunteered her time and talents at the annual SMCHS Carnival for many years and also lovingly served for funerals and the many Gift Fairs held at St. Anne’s throughout the years.

Mom always had a heart for those who were alone or who didn’t seem to fit-in somehow.  There were many times she would call the Air Force Base in Minot to see if there were any young men or women who needed a good meal on the holidays. Those people who sat at the dinner table were welcomed with grace, respect and the most amazing meals.  It wasn’t unusual to walk into Mom’s house and find somebody that she had just met outside on the sidewalk at the table having coffee– she genuinely loved people and the stories they had to share. “There were no strangers in Mom’s life – they were just friends she hadn’t met yet.”  (Modified from original quote  of William Butler Yeats)

As Mom’s health began to decline, she spent her last few months at Elm Crest Nursing Home in New Salem.  She carried her cross with dignity and grace and managed to find the good in each day. She was dearly and tenderly taken care of by the beautiful staff who have given their lives to helping the elderly.  In addition to carrying the load of the pandemic, the staff went above and beyond to ensure our Mom was taken care of in the best way possible.  Mom was touched by the visits of Fr. John Guthrie as he ministered to the residents of Elm Crest; she held a special place in her heart for him.

Visitation will be held from 4 to 9 p.m. Monday at Parkway Funeral Service, 2330 Tyler Pkwy, Bismarck. A rosary/vigil service will begin at 7 p.m.

A service livestream of the Funeral Mass and vigil service will be available on the funeral home’s website.

To order memorial trees or send flowers to the family in memory of Carol Glatt, please visit our flower store.