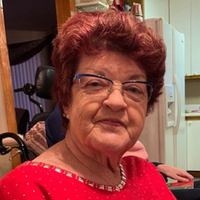 A Memorial Service will be held 11 a.m. Tuesday, March 2, at Parkway Funeral Service, 2330 Tyler Parkway, Bismarck, with Dennis Sailer officiating.  A visitation will be held from 5-7 p.m. Monday, March 1, at Parkway.  ​A Livestream service can be viewed on Carol's online obituary by visiting www.parkwayfuneral.com.

Carol was the second of five children born to Tony and Alice Schlosser. She had two sisters, Germaine and Julie; two brothers, Kenny and Anthony.  Carol graduated from Bismarck High School in 1964. After high school, she met the love of her life Rolf T. Svanes.

Carol and Rolf were married on March 11, 1965, Carol’s 19th birthday. They were the love of each other’s lives for 55 plus years. Carol and Rolf moved to the farm in Kintyre. Nothing like taking the city girl to the country. They raised three daughters, Denice, Melanie and Joy: The Farmer's Daughters.

Along with being a farm wife, Carol took up what she thought would be a hobby. That hobby turned into a lifelong venture of baking cakes for all kinds of celebrations. She is well known as THE CAKE LADY.

Carol and Rolf loved to travel whether it was a camping trip or snowmobile ride with family and friends. They enjoyed two special trips to Norway which was the time of their lives. They also visited Arizona, Hawaii and Las Vegas. They were proud of their 32 annual trips to the Norsk Hoskfest in Minot. In the last few years, they enjoyed their Sunday trips south to the casino.

In 2002, Carol and Rolf left the farm and moved to Bismarck to be closer to their girls. Carol started working at the Magic Candle Cakery and was still employed at the time of her passing.

To order memorial trees or send flowers to the family in memory of Carol Svanes, please visit our flower store.