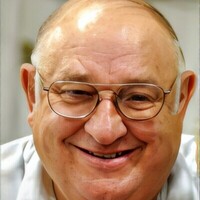 Burial to be held at the North Dakota Veterans Cemetery located south of Mandan, at 12:00 p.m. December 7. CST, at St. Mary’s Catholic Church in Bismarck,

Charlie was born on January 26, 1946, in Carson, North Dakota, to Lambert and Regina (Ternes) Miller. While growing up on a farm south of St. Gertrude, he attended Leahy Elementary School and graduated from St. Gertrude High School in 1964. He then attended North Dakota State College of Science in Wahpeton from 1964 to 1966, and the University of ND – Grand Forks from 1969 to 1970. Charlie served two years in the US Army from 1966 to 1968, one year of which he served in the combat zone in Vietnam.

On September 13, 1975, Charlie married Marlene (Paul) Schreiner at St. Gertrude’s Catholic Church and they resided in Raleigh together for 44 years, raising their seven children. Charlie owned the Raleigh Bar for two plus decades where he became a local historian and infamous storyteller. He started working at Prairie Learning Center in 1991 where he retired after 20 plus years.

Charlie was an avid sports fan especially when it came to the UND Fighting Sioux Hockey and the Minnesota Twins. One of Charlie’s proudest moments was raising the flag at the Minnesota Twins baseball game representing Flasher American Legion Post 69. He also enjoyed many card games including pinochle, cribbage, and even a recent game of “pig” with his siblings in which he lost and had to crawl under the table. Charlie enjoyed his family time with his children and grandchildren.

He had the gift to gab and anyone who met him never left without Charlie knowing where his new friend was born, the name of the dog he had in 4th grade, and his hometown. Charlie left a lasting impression on everyone he met.

There was nobody that he adored more than his wife of 46 years referred to as “Lover.”

Charlie was a member of the Flasher Knights of Columbus, a former St. Gertrude’s Parish Board member, and had been the Raleigh Township Clerk for many years. He was also a member of the Raleigh Antique Tractor Club, Raleigh Gun Club, Flasher Historical Society, Prairie Learning Center Advisory Board, Germans from Russia Society, and was a Hunter Safety Instructor for many years. He was also a lifetime member with the Flasher American Legion Post 69 and the Amvets.

He was preceded in death by his parents, Lambert and Regina; his brother, Pius; and his son, Larry (Butch) Schreiner.

To order memorial trees or send flowers to the family in memory of Charles L. Miller, please visit our flower store.