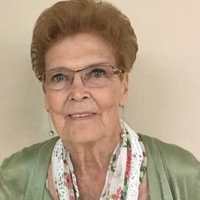 Christine “Chris” Irwin, 84, Bismarck, passed away peacefully on June 30, 2022 at her home surrounded by her loving family.

Chris was born in Douglas, ND on January 4, 1938.  She was raised the ninth of 11 children by her parents, Clarence and Bertha (Whitfield) Walhood.  She attended school in Douglas, and later in Spokane, Washington, while living with her older sister, Lorene.  Chris was married to Robert Irwin, who adored her, for over 60 years, until his death in March 2022. Together they raised six adventurous and loyal children.  They made their home in Bismarck.

Chris was a ‘stay at home mother’ until the younger children were out of elementary school.  At that time, she worked several jobs in retail, as well as modeling for Maurices and Buttreys in the 1970s.  Chris dressed very stylish, always so well put together, with beautiful coordinating accessories; jewelry, coats, footwear, etc.  Chris completed her certifications and acquired her realtors’ license in 1979, working for Castle Realty.  She had a real sharp mind for business and received numerous awards for ‘top sales.’  She remained active in the Real Estate business until 2018, at which time she officially retired.

Some of Chris’ hobbies were spending time with her husband, Bob, and her family, especially her grandchildren and the younger generations.  She also enjoyed sewing and was a wonderful seamstress.  Chris enjoyed shopping, dining out, (particularly at Jack’s Steakhouse) as well as, enjoying an occasional glass of wine while socializing with friends and family.

She had quite a quick wit and certainly always had something to say, to most anyone!

Our mom, grandma, great-grandma, and great-great-grandma will be deeply missed.  Our hearts feel some peace knowing she has joined our dad again, the absolute love of her life.

Chris was preceded in death by her kind, loving husband, Robert, her parents; her oldest son, Von Folden Jr. and eight of her siblings.

To order memorial trees or send flowers to the family in memory of Christine "Chris" Irwin, please visit our flower store.