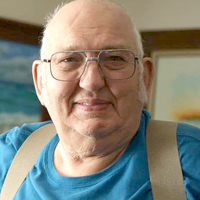 Clair Orgene Huwe, 85, died peacefully at St. Alexius Hospital, surrounded by his family.  A celebration of his life will be held 1 p.m. Tuesday, July 20 at Parkway Funeral Service, 2330 Tyler Pkwy, Bismarck. In keeping with Clair’s wishes, the service will be between 15 and 30 minutes long, with no standing up, sitting down, standing up, etc.

Clair was born on May 23, 1936, to Harry and Ella Huwe on the family farm in Divide County, North Dakota.  He graduated from the eighth grade and went to work at a bakery.  He was a master at rolling buns -- a skill he used his entire life.

He joined the United States Air Force in 1953.  He often told his children the Korean War ended because they heard he was coming.  Clair was stationed in Iceland, Florida and South Dakota.  He developed excellent potato peeling skills during that time, another skill he used throughout his life.

On August 17, 1957, he married the love of his life, Lola Ramberg. They were married for 53 years, until Lola’s death in 2011. They raised three children together: Terry, Ella and Julie.  They started out in an apartment, moved to a garage out in the country with an outhouse, then moved into town to the lot where they spent the remainder of their lives.  The first house was destroyed by fire, and Clair built the house that is there now.

Clair was a carpenter and construction worker. He worked on many buildings in Bismarck/Mandan, as well as surrounding states.  He worked on Northbrook Mall, Gateway Mall, Kirkwood Mall and the Federal Building to name a few.  One of the most memorable construction sites he worked on was the Bismarck Civic Center.  He brought the children one day and they got to walk with him on the catwalks. The kids loved it, Lola was not amused.

He loved to fish and volunteered with the North Dakota Game and Fish Department at the Bismarck pond, teaching children to fish.  He also volunteered for Lure ‘em for Life, spending two weeks in the summer working with kids at Fish Camp.

He was a quiet, calm person who never got too rattled. He loved visiting with neighbors and friends.  He loved watching Westerns.  Gunsmoke was his favorite.

To order memorial trees or send flowers to the family in memory of Clair Huwe, please visit our flower store.