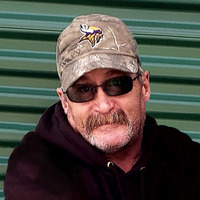 Clay R. Fowler, the eldest of five children came into this world July 20, 1962. Born in South Dakota, his parents moved to Valley City and then to Bismarck where they would call home. Unfortunately, March 11, 2021 after a strong battle in the St. Alexius Hospital, he passed away surrounded by family and loved ones.

Clay always loved sports with the Minnesota Vikings being, by far, his favorite team. Jeff Gordan’s NASCAR team coming in a close second. He played sports all through school and then went on to bull riding after. He quickly made a name for himself before hanging up the rope and spurs to be a family man and raising his daughter.

He really loved his work, being a master glazer for almost 30 years and making quite a career with Fargo Glass & Paint. His work can be seen all over Bismarck as well as many other cities and states. His life really revolved around his family, work, and sports. He loved to travel with Gene and Brandin to sporting events and even to Las Vegas although, he was incredibly shy which we all could get a laugh about.

He will be greatly missed by his surviving family: his father, Dwayne Bailey; brothers, Gene Fowler and Todd Bailey (Barbara); daughter, Kadee Fowler (Chance); nephews, Brandin Fowler (Brooke), Dylan Frederick (Trish), Tyler Mock (Susan); and nieces Erin Fowler and Jordan Bailey. Not to mention all the grandchildren whether immediate or not all held equal love is his heart; Rorie Fowler and Sage Hoots, Madasin and Zoey Fowler and Amelia Mock. Along with all the lifelong friends, coworkers and their families that were so important to him.

If anyone could build us a window to heaven it would be him.

To order memorial trees or send flowers to the family in memory of Clay R. Fowler, please visit our flower store.