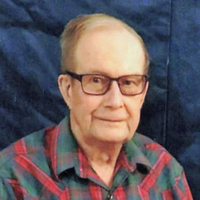 A memorial service will be held at 1:00 p.m. on Friday April 1, at Parkway Funeral Service. Family will start greeting visitors at 12:00 noon.

Cliff was born in Bismarck in 1927 to Emil and Alice Enockson and was joined by a younger brother, Gene. He grew up in Moffit next to the Farmer’s Elevator that his father managed. He always said he had the greatest childhood growing up in a small town with plenty of friends, playing marbles and baseball, skating and sledding on Long Lake, racing horses and hunting.

His earlier memories were of the Great Depression. He developed a strong work ethic seeing how hard people worked just to survive. He learned about generosity, watching as his mother helped out the homeless and gypsies who came to their door needing food.

He attended school in Moffit and graduated high school by correspondence. While he was still in his teens, his father acquired farmland north of Moffit. He was able to start raising cattle and crops, working w ith older relatives.

In 1951 he married Gerry Irvine. They raised three children, Gail, Susan and Rob on the farm. Over the years, Cliff and his father were able to expand the farm operation and build a large herd of Register Angus cattle.

He loved his life as a farmer and rancher and said that he wouldn’t trade it for anything. He remained actively involved with the farm up until about 10 years ago.

In earlier years, Cliff was a member of Moffit Methodist Church, Sterling School Board, Township Board, Lions Club and the Burleigh County FMHA Board. He believed in the necessity of planting trees to improve his farm and was the recipient of the Burleigh County Soil Conversation Award. In 2005 he was named ND Angus Association’s “Man of the Year.” In 2015 he was recognized for his 65 year membership in the ND Stockmen’s Association.

Cliff enjoyed the outdoors and hunting his whole life – the highlight being his elk hunting trips to Montana. He loved playing a good game of cards, reading and visiting over coffee with friends and relatives.

To order memorial trees or send flowers to the family in memory of Clifford Enockson, please visit our flower store.