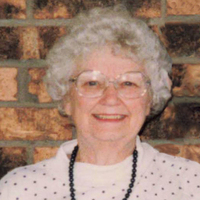 Coliene (Taylor) Jacobsen, Bismarck, joined her husband in heaven on May 5, 2022.

A funeral service will be held at 1 p.m. Wednesday, May 11 at Trinity Lutheran Church, 502 N Fourth St, Bismarck. A service livestream can be viewed from the church’s website: https://trinitybismarck.com/funeral-livestream/

Visitation will be held from 5 to 6:30 p.m. Tuesday at Eastgate Funeral Service, 2302 E Divide Ave., Bismarck, with a prayer service at 6:30 p.m. Visitation will continue one-hour prior to the service.

Coliene Elizabeth Taylor was born to John H. and Sybil V. (Gibson) Taylor on September 23, 1928, in Oklahoma City, Oklahoma. In 1938 the family moved to Blabon, North Dakota, and later to Zap where John Taylor was a rural mail carrier. Coliene graduated from Zap High School in 1946.

Coliene pursued her teaching career at Dickinson State College. She later received her masters degree at Northern State College in Aberdeen, South Dakota. She was very proud of the many young people whom she taught high school English in Ryder, Parshall, New Salem, Turtle Lake and her last 22 years in McClusky.

Coliene married Vernon A. Jacobsen July 18, 1952. They were partners in teaching and in their lives together. They were the proud parents of Tanna (nursing), Andrew (heating and air), and Karra (veterinarian assistant). She also has two grandsons, Christopher Allen and Brian Samuel and three great-grandchildren, Madison Elizabeth, Olivia Jayne, and Cade Allen.

In 1958, she and Vernon tent camped to Alaska and back on the unbelievable and challenging Alaska highway. She always remembered Vernon getting their first salmon by hitting it with the blunt end of his hatchet. He obtained ice for their ice box (none for sale) by chopping it off the end of the glaciers. What a wonderful trip they shared. They also enjoyed playing in the “Something Else” band with fellow teachers.

Over the years their family enjoyed camping in the U.S. National Parks and in Canada. It was a time of learning and togetherness. When their children graduated, they went to Texas to visit Karra and grandsons, Christopher and Brian. They also visited Coliene’s parents and other family in Oklahoma and Kansas.

They retired in 1990 because of Vernon’s health. After his death in 2000, Coliene coped by playing the piano and reading. She always kept herself busy.

In 1992, Coliene began teaching ESL/ELL to refugees who needed to learn our language and customs. These special people brought great joy to her later years.  She loved this part of her life. Ex-student Winnie and her daughter, Lilly, become a part of her family. Extended family includes Yan Yu and her daughters, Sa Kong and Grace; and LeTran and Bryan Martin. She had many other special families who enriched her life and whom she was so privileged to teach and know.

Coliene belonged to the Trinity Lutheran Church and Wednesday Women’s Bible Study. This group soon became family to one another. She tried to live her life by the admonition “Do unto others …”

Coliene was preceded in death by her husband, Vernon; her parents, John and Sybil Taylor; brothers, John and Joseph; grandson, Christopher Allen; a special cousin, Dan Gibson; and a sister of the heart, Marilyn Melchior.

Memorials may be made to the Trinity Lutheran Church, the Salvation Army, Great Plains Food Bank, or to one’s choice.

To order memorial trees or send flowers to the family in memory of Coliene E. Jacobsen, please visit our flower store.