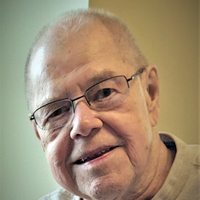 A family service will be held at 9:00AM, August 11 at The North Dakota Veterans Memorial Cemetery, Mandan with a graveside ceremony to follow with Military Honors.

He was born on July 20, 1931 in Nome, North Dakota to John and Anna (Fisher) Kolrud. He attended grade and high school in Nome and as a teen was hired to help with chores on surrounding farms.

On December 9, 1948, at age 17, Dale enlisted in the US Army in Fargo. He enlisted for two years but due to the Korean War he was extended another year and spent it in Korea. Dale spent a year in combat and hospitalized three times for injuries and was awarded the Purple Heart. While serving, he was a radio operator, infantryman and tank driver. He was honorably discharged December 10, 1951 and returned to Nome.

Dale went to work for Northwestern Bell in 1952 in Valley City.  His telephone career was spent in Rugby, Grand Forks, Jamestown and many small rural communities across the state. His positions included lineman, splicer, combination technician and installer-repairman.  After a long career in telecommunications, Dale retired in 1990 with 38 years of service.

While working in Drake, ND, he met a telephone operator by the name of Bernice Steig and after only one date, Dale proposed, and they were married a year later on June 19, 1954 at Trinity Lutheran Church in Drake.  They had three children, Crystal Ann, Mark Alan and Jon Dale.

While living in Jamestown, Dale served on the City Council from 1970-1982. While a Councilman, he served on the Fire and Police Committee, Civic Center Commission and Planning and Zoning Committee.

He always loved to read, act like a cowboy and shoot pistols, hunt, fish, watch African wildlife shows, visiting and enjoyed the trips to the casino once in a while to hone his card skills. Coffee and marshmallow shakes were his beverage of choice! Jelly beans were always conveniently within reach.

Dale wanted to be remembered as a good husband, dad, grandpa, great-grandpa and friend.  He loved to laugh and help people.  He was very proud to serve his country.

To order memorial trees or send flowers to the family in memory of Dale K. Kolrud, please visit our flower store.