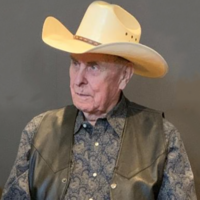 Well, my time on earth has come to an end… I've joined family and friends in heaven.

My life has been full of morning coffee with friends, caramel rolls, playing cards, polka, casinos, Little Cottage, AMVETS and more as I kept the grass from growing under my feet until now.

A private burial will be held at the North Dakota Veterans Cemetery at a later date.

Dale Robert Vollan was born August 12, 1929, in Bismarck. He is the son of John Vollan Sr. and Lousie (Erickson) Vollan. He grew up on a farm east of Wilton. Dale farmed and ranched, and was also in the army.

To order memorial trees or send flowers to the family in memory of Dale Vollan, please visit our flower store.