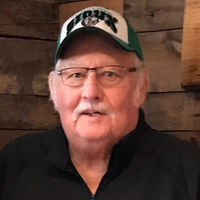 Visitation will be held from 5 to 7 p.m. Friday at Parkway Funeral Service, 2330 Tyler Pkwy, Bismarck. A rosary/vigil service will begin at 7 p.m.

Daniel was born on March 23, 1951 to Stanley and Alice (Frappier) Feland. He was raised in Westhope and Grand Forks. He graduated from Grand Forks Central High School in 1969. Following graduation, he attended the University of North Dakota where he made many lifelong friends. After college, he worked on the Soo Line Railway.

In 1981, he married Karen Heintz in Bismarck where the two made their home. From this union, two daughters were born.

Dan had many interests throughout his life. He enjoyed golfing, bowling, fishing, camping, skiing and hunting. He also enjoyed taking trips with his family.

He enjoyed his part time job at Sam’s Club until his illness led him into retirement.

He was preceded in death by his parents, Stanley and Alice Feland; and parents-in-law, Tony and Alice Heintz.

Dan was especially proud of his daughters and grandchildren.

To order memorial trees or send flowers to the family in memory of Daniel Feland, please visit our flower store.