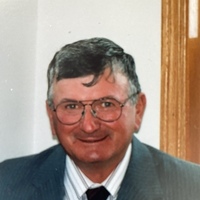 Dan, the only son of Daniel Thomas Keily, Sr., and Mary Margaret Noonan, was born March 7, 1937 in Steele.  He was the last in the family after being preceded by seven sisters.  He would often tell of the pranks his sisters would play on him.  He recalled long days working in the fields, hauling hay and milking cows. Dan loved playing sports, especially baseball.  He fondly recalled playing for local community teams. He graduated from Tappen Public School in 1955.

He married his beloved wife, Lois Grace Robinson, June 18, 1956 at St Paul’s Catholic Church in Tappen.  Ten children were born to this union, LaVonne (Nonnie), Ralph, Daniel (Danny), Mary, Bridget, Patrick, Corrine (Corky), Karen, Michael (Mike) and Patricia (Tricia).  He welcomed his nephew, Eric Anderson, into the family and raised him as his own son.  He was gifted with 18 grandchildren and 19 great-grandchildren.  He loved them with his whole heart and was proud of each, and everyone.  He would often say, “How did I get so lucky to have such a wonderful bunch of kids as my kids.”  This love was returned by the grandchildren and great grandchildren who called him Super Papa.

Dan was very active in his community.  He served on the parish council at St Paul’s Catholic Church in Tappen, was a member of the Knights of Columbus in Tappen, was 4H leader for the Tappen Ag 4H club, Advisor for Tappen FFA club and served on many boards of the county and state.

Dan loved to sing.  He entered many karaoke contests and sang for weddings and funerals.  He taught the love for singing to his children and encouraged us all to learn music. Lois and the sons-in-law stood silently in the back.

Dan’s humor was evident in everything he did. Teasing and dry sarcasm was his forte. Most everyone had a specific joke Dan had told or a trick he had played on someone.

Every person Dad met was a friend.  He greeted everyone with a Hello and would speak of the weather, events and would carry on a several minutes long conversation with his new friend.  As kids we thought Dad knew everyone in the world.  As we would drive to various towns we would say “who lives there, Dad” and he would answer “Joe Smith” or other such thing and we would believe him.  After all Dad would never tell us a fib!

Visitation will be held from 5 to 7 p.m. Thursday, April 29 at St Paul’s Catholic Church, Tappen. A rosary service will be held immediately following visitation at 7 p.m.

A Mass of Christian burial will be held 10:30 a.m. Friday at St Paul’s Catholic Church.

Burial to follow the services at Fisher Cemetery, Tappen.

Fellowship after the burial at the Tappen Community Center.

Dan’s family would like to thank the people who shared in his life.  We are forever thankful for the kindness and love provided to our Dad by the staff of Presentation Medical Center of Rolla,.  They lovingly cared for him in his final months of life.  Plant a tree in remembrance of Dan.

In lieu of memorials, please consider making a donation in memory of our Dad to Kidder County Angels or a charity of your choice.

To order memorial trees or send flowers to the family in memory of Daniel Keily, please visit our flower store.