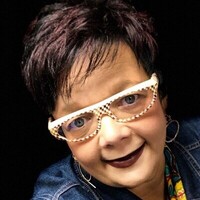 Visitation will be on Thursday, from 5:00 until 7:00 with a Vigil Rosary service starting at 7:00 at Parkway Funeral Service, 2330 Tyler Parkway. Burial will take place at the North Dakota Veterans Cemetery at 1:00 on Friday.

Darlene Marie Horner was born on November 22, 1959, in Linton, ND, the daughter of Michael and Hildegard (Keller) Horner. She was the second oldest of six children and was raised and educated in Linton, graduating from Linton High School in 1978. She continued her education at NDSCS in Wahpeton, where she received an associate's degree in Business.

Dar worked at KG Men's store for a few years. At that job, she met Chuck Wolfgram. They weren't dating, but Chuck took her out on their break time. After that impromptu "date", Dar called her mom and told her she met the man she was going to marry. On September 4, 1981, Chuck and Dar got married and made their home in Bismarck. She spent 40 years working for the North Dakota State Information Technology Department as an Administrative Staff Officer. She had the opportunity to retire but loved her job so much wanted to continue working. She was everyone's "go-to" person and became known as the "Office Mom". In 2007, she received the Governor's Excellence in Service Award and was nominated again this year.

Not only did Dar love her job with the state, but she didn't waste a minute of her free time. She had a passion for crocheting, all her siblings, nieces, and nephews had at least one afghan. Dar made thousands of crotched dishcloths, most of which were gifted to friends and relatives. She and Chuck enjoyed traveling, especially to Arizona, Florida, Fargo, and Minneapolis.

Dar and Chuck housed many Dakota Wizard basketball players. They cooked many meals for the team and went to all the games, where she often took pictures. She called herself a hobby photographer, taking photos for graduating seniors, families, team sports, and more.

The funky glasses, perfect hair and nails, the on-point make-up, and fun jewelry, were just a glimpse into Dar's inspiring personality. She had a kind heart and a sweet soul, always thinking of others. She was known to send cards on special occasions, and her knack for being extremely organized had her prepared a year and a half in advance so she didn't miss anyone. The daily good morning and good night texts she sent to family and friends, along with the inspirational quotes are already missed.

She was preceded in death by her father, Michael Horner; father-in-law, Everett Wolfgram; sister-in-law, Wanda Wolfgram, and great-nephew, Sam Horner.

To order memorial trees or send flowers to the family in memory of Dar M. Wolfgram, please visit our flower store.