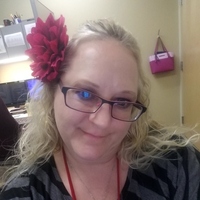 The mass will be live streamed on the Spirit of Life Facebook page by clicking on the following link. https://www.facebook.com/spiritoflifecatholicchurch/

The Graveside Service at the Veterans Cemetery will be available below starting at 3:00 pm. When the service becomes live, a play button will appear in the center of the black box, click the play button to view the service. With any issues, please refresh your page and/or turn up your volume. If issues persist, please contact the funeral home.

On this day 5 March 2021, Darbie Kay (Fleck) Young, 48, Chapman, Kansas has completed her journey as a WARRIOR and has begun her new journey as our GUARDIAN ANGEL, along the side of our Lord and Savior Jesus Christ.

Mass of Christian Burial will be held 1:30 p.m. Friday, March 12, 1:30 at Spirit of Life Catholic Church, 801 First St SE, Mandan.  A service livestream will be available on the church’s Facebook page.

Visitation will be held from 5 to 7 p.m. Thursday at Parkway Funeral Service, 2330 Tyler Pkwy, with a prayer service at 7 p.m.

Burial will be held 3 p.m. Friday at the North Dakota Veterans Cemetery, Mandan.

Darbie was born on Nov. 11, 1972 to Mr. Jack and Lenora Fleck in Devil’s Lake, North Dakota. She was raised in Mandan, North Dakota, alongside her brother, Tim Fleck, and sister, Robin (Fleck) Jundt, graduating from Mandan High School in 1991, beginning her WARRIOR journey. She attended Bismarck State University and Minot State University, earning an Associates of Arts degree.

Darbie joined the United States Army Jan. 1997. She completed her basic training in Fort Leonard Wood, Missouri, and concluded her Advanced training at Fort Sam Huston, Texas, as a mental health technician. Darbie was stationed at Fort Huachuca, Arizona.  While at Ft. Huachuca, Darbie was promoted to Sergeant, and re-classed to become an Army Intelligence Analyst.   She continued her service at Fort Riley, Kansas earning the rank of Staff Sergeant.  While stationed at Ft. Riley, Darbie served her country with honor and distinction during two combat deployments to Iraq.  Her achievements during her service to this great country are many, most notably, the Combat Action Badge, five Army Commendations Metals, and being selected by the Department of Army to be promoted to Sergeant First Class with less than 10 years of service.  Darbie fulfilled her service in December 2006.

“The road to freedom isn’t free, and thus is open to us all.”  -Abraham Lincoln

It was during her second deployment to Iraq when she met her soon to be husband, Elmer Young. On a blind leap of faith Darbie opened her heart, soul and life to him and his two children, Shelby Renee (Young) Collins and Senior Airman (SRA) John Paul Young.  Marrying Elmer on Dec. 18, 2006 and so began her new role, WARRIOR, wife and mother. She also started a new career, still providing service to her country, not as a soldier, but as a Department of Defense Civilian in January 2007.  She took her new roles head on, leaning into the wind and without fear.

Darbie raised her children with an iron fist, the ferocity of a Mama Bear and with love and compassion  of a Saint. Guiding them along their own paths, giving them encouragement, motivating them to aspire to greatness and never settle for second best.  To be independent, thoughtful and compassionate to others, to safeguard their morals and values and always do the right thing, no matter how hard it might be.  Through Darbie’s nurturing she was able to witness her daughter graduate with two college degrees and get married to Nathan Collins and his son Hunter. She was able to watch her son complete his “right of passage” and graduate from the United States Airforce basic training, serving his country in Afghanistan and flourish in his military career.  There is no greater achievement a parent can have, there is no greater sense of accomplishment than to know your children have become successful adults. This is especially true for Darbie, she has no greater sense of pride and the feeling of accomplishment then to know that all her sacrifices, hard work and always putting her children first paid off. She will rest peacefully, knowing that her children will live their lives with the values she worked so hard to instill in them.

While simultaneously being a wife and mother Darbie worked as the Department Manager for Security at the Irwin Army Hospital, developing and implementing an armed security guard force and constantly working everyday to make her hospital safe and secure for the soldiers it serves. She also attained her bachelor’s and master’s degree in security management.

We can all reflect on Darbie’s life, it meant so much to so many and for various reason.  There is one certainty and truth we can all hold dear to our hearts.  Darbie’s love, compassion, selflessness and thoughtfulness was far reaching and never ending.  Her love to you all had no boundaries, no limitations nor an expiration date.  She touched the hearts of all she called a friend and family, in fact if you were her friend, you were her family. Know this; when you are facing hard times and you feel a gentle breeze on the back of your neck, it is our GUARDIAN ANGEL helping to LEAN INTO THE WIND.

To order memorial trees or send flowers to the family in memory of Darbie K. Young, please visit our flower store.