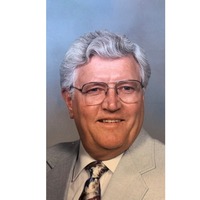 A service livestream will be available below starting at the time of the service. This livestream will play directly from Good Shepherd Lutheran's Facebook page at https://www.facebook.com/goodshepherdbismarck/

Darrell Lee McQuay was welcomed into the arms of Our Lord on Thursday, January 14, 2021, surrounded by family and after listening to grandchildren via telephone and being blessed by Amazing Grace sung to him by a granddaughter.  He received everlasting peace after suffering from dementia for many years.

Darrell was born on March 9, 1937, in Drake, North Dakota, to Lloyd and Eleanor (Nord) McQuay, the third of three sons. He grew up in Drake, graduating from Drake High School with the Class of 1956, where he also met his soulmate and the love of his life, Connie Hamers.

After high school Darrell joined the army, serving stateside and in Korea.  He served from 1956 until being honorably discharged in 1958.

Darrell and Connie were married on June 7, 1959, in Drake. He and Connie then moved to Bismarck, North Dakota, where they lived out their lives together. To that union were born three children, Scott Matthew, Suzan Leigh, and Christopher (stillborn).

After attending Minot State College (now Minot State University), Darrell began his career in banking, working for many years at Dakota National Bank (now Wells Fargo Bank) in Bismarck, retiring from that field as a vice president at the bank.  He and Connie then went on to establish Dakota Fire and Safety Store in both Bismarck and Fargo, which they owned until 1993, when they retired.

Following retirement he spent many hours volunteering at Sanford Medical Center, enjoying Wednesday coffee with his Men’s Coffee Group at Wendy’s,  Kiwanis on Tuesdays, spending as much time as possible with his children and grandchildren, as well as befriending and helping family and friends in any way needed.

Darrell was always very active in church, especially at Good Shepherd Lutheran in Bismarck. He also was a member of Bismarck Jaycees, Kiwanis (60+ years), Century High School Boosters and all high school sports, Brush Lake Cabin Association, Roughriders Camping Club, Elks, American Legion, Sanford Medical Center Volunteers, and as a NDHSAA Girls Basketball Tournament Host. He and Connie were the first ones to receive the Century Fans of the Year Award.

He moved to memory care at New Perspective Senior Living in West Fargo, North Dakota, in late December, where he could be near his son and daughter-in-law.

In lieu of flowers, please feel free to contribute to the North Dakota Veterans Cemetery, Good Shepherd Lutheran Church in Bismarck, or a charity of your choice.

To order memorial trees or send flowers to the family in memory of Darrell L. McQuay, please visit our flower store.