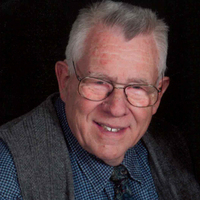 David Charles Garner was born April 25, 1933 to David W. and Blanche Garner in Moorhead, Minnesota. He went to meet Jesus on December 29, 2021 with his daughter, Ginger at his side.

When David was three, Grandma Jenny Garner took him to Trinity Church and there he met his best friend for life- Jesus.

His education was special: one “class” of grades 1-12 were taught by college professors and was held on the Moorhead State College campus. It was there that he was introduced to Mensa (and became a life member) and there that he discovered that he had a talent for art. As soon as he was able, he had to work after school at his Dad’s Butcher shop. About seven years later, his sister Roberta (Bobby) arrived.

In about 1955, he married Donna Mae Johnson. They had three children, Teri, Lee and Scott. They divorced 12 years later.

His first commercial art job was with Silverline Boats in Moorhead.

On April 22, 1967 he married Donna Marie Stensland at American Lutheran Church in Fargo. They met while taking fencing.  Two children joined the family: Lisa Lynn, 1968 and Ginger Lea in 1970.

In early 1971, David was asked to start a commercial art program at the vocational building at Moorhead State University.

After he completed the project and also in 1971, he was asked to start a Commercial Art Program at the New Vocational School of Bismarck State College and to teach. In August 1971, the family moved to Bismarck. In March 1972, a son, Chad David arrived.

After teaching commercial art for about 3 years, he was asked to manage but declined. He then went into the silk screen business.

David remained a man of God. At Trinity, Bismarck, he made two banners. He also, with a friend, taught adult S.S. for all the years he and Donna attended.

When the kids left for college, he and Donna transferred up to Charity Lutheran. There he was a faithful person at Men’s Bible Study. Every Saturday, he and Donna also attended group bible studies. David also loved nature. He always had dogs, cats or fish.

David Garner was a “gardener.” There was always fresh vegetables, as well as apples and strawberries. He loved going out in the early morning to be with his friend, Jesus. He also had lots of flowers and cactuses. David was also a “giver.” He donated blood every one or two weeks and loved visiting with staff and other donors. He gave for many years. He also gave to many charitable organizations, especially for veterans. (He’d wanted to serve but could not due to bad asthma.) He also taught an art class at Fort Yates once a week.

David became ill in November of 2017 and has spent the last 4 years at nursing home right up until December 29, 2021.

He will be sorely missed by all.

To order memorial trees or send flowers to the family in memory of David Charles Garner, please visit our flower store.