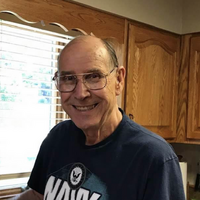 David Edward Gast was born to Edward and Irene "Susie" Krause Gast in Fargo on April 12, 1939, and passed away peacefully on September, 19, 2021. He often joked about being a grouchy old man who could at times be crotchety, but he never quite made it to his overall goal of cantankerous. He continued to assure his children that they were not required to grow up until he did and that he was still not yet ready for that kind of responsibility.

Dave attended elementary schools in Bismarck, Moorhead and Fargo, Ben Franklin Junior High and graduated from Fargo Central High School in 1957. In school Dave (aka Emil) was involved in the National Athletic Scholarship Society, Football, Basketball, school plays, the school radio program and a bunch of other stuff. He worked summers at Dakota Plate and Glass while in high school and during college he worked summers at Super Value Stores, Inc. on West Main in Fargo.  Dave received a Bachelor of Science in Economics from NDSU in 1961.

Dave proudly served his country from 1962-63 in the Navy aboard the Icebreaker USS Staten Island after completing Officer Training School and Communications School. He travelled to New Zealand, Antarctica and the South Pole, Chile and many ports and seas in between. He truly treasured his time and adventures in the Navy.

Dave worked for International Harvester, which changed to Navistar and then for Nelson International in Bismarck until retirement.

On July 17, 1965, Dave married Karen "Kay" Evenson in Moorhead, Minnesota.  The couple were foster parents to children in need before they had Anne and Daniel and lived in North Fargo for many years.  In 1995 they made the move to Bismarck to live in a home on the prettiest hill around, overlooking the whole town. Dave spent a great deal of time proudly tending to his lawn, his gardens and the many creatures who lived and visited his beautiful backyard.

Dave had consistent hobbies throughout his life. He took his first Canadian fishing trips in 1960, and went back many, many times. He even made a few trips to Alaska, just for the Halibut. Even before those trips, Dave spent his free time fishing, camping, hunting, woodworking, fishing, reading, gardening, watching NDSU football and basketball games, fishing, feeding birds and squirrels, hunting, fishing, mowing the lawn, gardening, fishing, and occasionally catching fish. This past summer Dave fished the mighty Missouri River with his oldest grandson, Koby, and caught two Northern Pike, the only fish he'd ever caught in the river and the first fish he's caught in about eight years. It was a really great day.

Grandpa David loved his 10 grandchildren more than anything else in this world (even fishing) and he lit up whenever he even thought about them. He had a whole bunch so they wore him out sometimes, but he absolutely loved it.

He has been reunited with many loved ones who passed before him including his parents; his wife, Kay; his granddaughter, Tahlin; two brothers, Charles "Charlie" and Richard "Dick" Gast; and too many friends and classmates. Dave especially looked forward to and enjoyed attending his high school reunions and was sad each time he went to see the class grow smaller and smaller.

Interment of the ashes of both Dave and Kay will be held 9 a.m. Monday, Oct. 11 at the North Dakota Veterans Cemetery, Mandan.

Dave's children respectfully request that memorials be made in his name to the LBDA (Lewy Body Dementia Association) in honor of his brother Dick at www.lbda.org or The American Cancer Society in honor of his wife Kay at www.cancer.org.  Dave himself would actually prefer you honor and remember him by getting yourselves and family members vaccinated against Covid.

To order memorial trees or send flowers to the family in memory of David Gast, please visit our flower store.