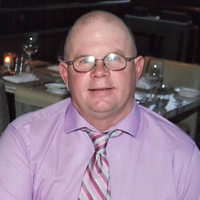 Dean Ray Scheetz, 58, Bismarck, formerly of Hensler, passed away Oct. 7, 2021, in a Bismarck Hospital. Mass of Christian Burial will be held at 10 a.m., Wednesday, Oct. 13 at Church of Corpus Christi, 1919 N Second St., Bismarck. The family requests that masks be worn at the Funeral Mass. A service livestream of the funeral mass can be viewed at https://corpuschristibismarck.com/

Interment will be at the St. Mary’s Cemetery, Bismarck, following the Mass.

Visitation will be held from 5 to 8 p.m. Tuesday with a Rosary/Vigil Service beginning at 6 p.m. at Parkway Funeral Service, 2330 Tyler Pkwy, Bismarck.

Dean was born June 24, 1963, in Bismarck to Ray and Theresa Scheetz.  He was raised and educated in Bismarck, where he graduated from Century High School and Bismarck Junior College. During his career, Dean has worked at Dakota Gasification Company, Hawkin Chemicals, Kinder Morgan and Crestwood.

In May 1986, Dean and Denise Richard were married at St. Patrick Catholic Church, Dickinson.  They lived in Beulah where Cam, Holly and Heidi were born.  In 2006, they moved to Washburn/Hensler.

Dean was very passionate about his hobbies of demolition derby, raising GIANT pumpkins, ice fishing and hunting. While the kids were growing up, you could find the Scheetz family at many local fairs showing their pigs or goats.

In May 2020 Dean and Merlyn Ramos were married at St. John Neumann Catholic Church, Las Vegas, Nevada, and settled in Bismarck.

In lieu of flowers, please make donations to your favorite charity.

A recording of the Rosary/Vigil service is available below. Due to unforeseen connection errors, a small portion of the video is without audio.

To order memorial trees or send flowers to the family in memory of Dean Scheetz, please visit our flower store.