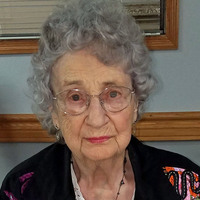 Visitation will be held from 5 to 6:30 p.m. Wednesday at Parkway Funeral Service, 2330 Tyler Pkwy, Bismarck. A prayer service will begin at 6:30 p.m. Visitation will also continue one hour-prior at the church.

Burial will be held at the Regan Cemetery, Regan.

Deloris was born March 3, 1925 in Bismarck the daughter of Porter and Alice (Johnson) Nelson. She was the second of seven children. She had an older brother and five younger sisters. She grew up in the Baldwin-Regan area and graduated from Regan High School.

Deloris was engaged to Willis Alm, a local farm guy of the Regan vicinity, when World War II broke out and soon, he was called to service. After a year of duty and still in the States, they decided to get married on Sept. 25, 1943 at his sister Hollices Church. Deloris found many jobs in California as her G.I. husband was in an outfit that patrolled the coast of California, headquartering in different cities along the way. Finally the word came, overseas duty next, so Deloris returned home where she began teaching school again.

When the war finally ended, Deloris and Willis were to resume farm life. They purchased the what was known as Wood Lawn Farm from their long-time neighbor and friend, Walter Schmanski. Farm life began…it was here their children were born and raised. Judy Faye (Larry) Berquist, Wing, Douglas (Carol) Alm, Bismarck and Terry (Delphine) Alm, Mandan.

Deloris taught in the one room country schools for seven and a half years, she was also the Burleigh County Farmers Union Youth advisor for six years. She had many other interests, among them, serving for family and herself, making quilts, gardening, chores, etc. Deloris was always active in church affairs from singing in the choir to teaching Sunday school and bible school.

Her husband, Willis, passed away at their farm home very unexpectedly on Oct. 15, 1981. She continued to reside at the farm for 19 more years. In 1990 Deloris received “The Farm Tree Care Award” for outstanding start of a new grove of trees on their farmstead.

The year 2000, she had an auction sale, sold the farmstead and purchased a home in Bismarck. After moving to Bismarck, she continued to be active in civic and church affairs. Deloris was one of several people who took part in interviewing veterans for the North Dakota State Historical Society Archives and Library. She continued to be active in her church, Grace Lutheran Brethren, hosting Women’s Bible Study in her home and also taking a part in Stonecraft Christian Women meetings.

Deloris thoroughly enjoyed her family of three children, eight grandchildren, many great-grandchildren and one great-great-granddaughter. She had a great deal of love and respect for each member of her family, including her nieces and nephews as well.

She is survived by her children, Judy, Doug and Terry and their families.

To order memorial trees or send flowers to the family in memory of Deloris Alm, please visit our flower store.