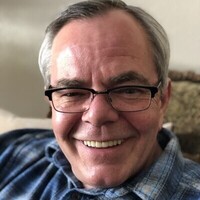 Dennis Dale Dockter died as he lived; with restrained dignity.  He died in the arms of his wife at their home on December 18, 2021.

Born on December 6, 1955, Dennis was the apple of their eye and only child of Emil and Freda (Stolz) Dockter. Dennis cared lovingly and kindly for his parents as they aged.  He turned down an offer from Justice Sparky Gierke and a move to Washington, D.C. at his mother’s behest. She wanted Dennis to help care for his dad, Emil, who had developed Parkinson’s.

When Dennis joined band in middle school, he wanted to play drums.  His disappointment at being selected to play trombone “because of his long arms” was enormous.  Dennis’s dad, ever his hero, had a discussion with the band director who quickly dropped the “long arm” theory and assigned Dennis to percussion. This set into motion a musical passion that spanned his entire life and also earned him the Arion award at Bismarck High School in 1974. Countless hours were spent rehearsing, gigging and setting up and tearing down his trap set. Dennis enjoyed playing all types of music from jazz to rock and roll.  He had fond memories of gigging with his dad.  Dennis was especially proud of his inclusion in the ND State American Legion Band. He and several high school friends reunited in the early 2000’s for one last run, Everybody’s Doin’ It played at local bars and events for a couple years. While it was fun, Dennis often remarked that this venture reminded him why he quit rock and roll bands in the first place.

Dennis had an interest in politics and journalism and studied the same while at Bismarck Junior College where he was a staff reporter for the campus paper and a member of the BJC music department. The stories he told of the band trips are legend.  He graduated from BJC in 1976 and then went to University of North Dakota. It was during his time at UND that he realized journalism would not provide the career or lifestyle he was seeking.  He graduated from UND in 1979 and immediately began law school at UND School of Law; graduating 1982.  That same year he became a clerk for the North Dakota Supreme Court and held that position for one year, at which time he was hired as a full-time staff attorney.  He held that position until he retired in January, 2020.

Dennis married Laura Schmidt in 2001. He supported and encouraged Laura in everything she did from getting a college degree to taking up running.  Dennis was welcomed and cherished by Laura’s extended family. His keen wit and dry humor made him an immediate favorite.  He was especially close to great niece Lexi (Dralle) Hines.  With Lexi he could be a kid again; dancing on bubble wrap and shooting screeching balloon rockets into the giant pine trees and onto neighbors’ roofs.

Dennis was preceded in death by his parents and numerous aunts, uncles, cousins and friends.  He is survived by his wife, Laura and their cat, Medora; several cousins including Keith Eliason and Evy Olson; Laura’s family, including her parents, Andy and Joan Schmidt of Braddock, ND and great niece, Lexi.

Dennis, whose laughter could light up an entire room, or heart, was kind beyond measure.  He lived with enthusiasm and did all he could to stay here a while longer.  Alas, he was foiled at every turn.  Dennis will be honored and remembered at an event in the Spring.

I love you my sweet Mister. “How lonesome our home bereft of thee”.

A Celebration of Life will be planned at a later date.

To order memorial trees or send flowers to the family in memory of Dennis Dale Dockter, please visit our flower store.