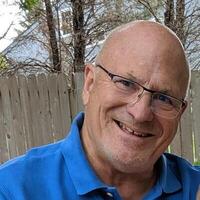 Visitation will be held 5 to 7 p.m. Wednesday at Parkway Funeral Service, 2330 Tyler Pkwy, Bismarck.  A prayer service will begin at 6 p.m.

A livestream of the service will be available for viewing at Zion Lutheran Church's website: www.zionbismarck.org

Dennis was born Feb. 17, 1955, to Arthur and Elaine (Miller) Huber in Bismarck.  He attended school in Bismarck, graduating from Bismarck High School in 1973.  Growing up, his family spent time at the family farm north of Dodge.  During high school he worked at his father’s business Becker Huber Electric.  Following high school, Dennis attended Mary College graduating in 1977 with a business degree, earned his private pilot’s license and bought his favorite car, a 1963 split window corvette.  After college he worked at Basin Electric, jointly ran a small business “Pops Ice Cream Shoppe,” then going into real estate with Ask, Inc., later working for his uncle and aunt, Rollie and Yvonne Huber at Logan Hill Realty.    His future favorite brother-in-law, Mark Wald, set him up with a blind date and four years later he and Laura Boehm were married in 1985.  To this union were born Alexander John in 1987, Kate Elizabeth in 1989 and Zachary Adam in 1992.

Dennis worked in the insurance field for many years and in later years he and his son, Alex, worked and traveled around the upper Midwest doing projects for NSA.  In recent years he enjoyed time spent travelling the country with his significant other Daryl-Lynne Joy Lemieux of Regina, Canada.  Besides travelling, Dennis’ hobbies included spending time fishing at his cabin, flying his airplane and after all these years he still had, and used, his 1963 Stingray Corvette.  Dennis loved music, particularly Jazz and Big Band Music.  He was a life-long player of the trombone and was involved with a number of local Big Bands.  Life-long friend and fellow jazz musician, Scott Prebys, describes Dennis’ love of jazz music as follows: “Dennis was undoubtedly one of the most enthusiastic supporters of jazz and popular music in the region.  His presence was ubiquitous both on-stage, and in the audience, where he shared camaraderie with every musician he met.  His trademark hearty shout of approval was often heard during inspired performances as well as his generous and lengthy applause.  Dennis would unhesitatingly drive 100-200 miles to hear a traveling big band in concert, regardless of the weather.  When properly inspired, his friends were often treated to him performing an impromptu “air-trombone” solo or him singing a few measures of “What a Wonderful World” a la Louis (Satchmo) Armstrong.  He could also play a mean drum solo while his hands were on the steering wheel, while driving!“

Dennis was preceded in death by his parents, Art and Elaine Huber; grandparents, Alex and Minnie Huber and Gothart and Helen Miller; and his significant other, Daryl-Lynne Joy Lemieux.

To order memorial trees or send flowers to the family in memory of Dennis Huber, please visit our flower store.