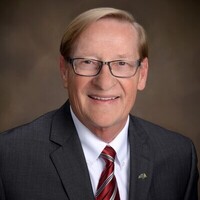 Dennis was born on June 8, 1953, in Dickinson to Ray and Carol Ming, the third of seven children. He grew up on a small grain farm southwest of New England, ND and graduated from high school in 1971. He served in the U.S. Army and was stationed in Schweinfurt, Germany, and served in the National Guard. He then attended North Dakota State University, earning B.S. and M.S. degrees in Agricultural Economics.

From 1981-86, he worked as a research associate at the Upper Great Plains Transportation Institute. He then took a grain marketing position with Soo Line/Canadian Pacific Railroad in Minot and worked in various marketing positions for 10 years.

Dennis joined the Dakota Missouri Valley and Western Railroad in Bismarck in 1996 as Vice President of Marketing and became part owner. He retired in 2017 and continued to serve on DMVW’s executive board and was an owner until his death.

He also served on the board of the North Dakota Agricultural Products Utilization Commission, the Minot and Bismarck Economic Development Boards, the Midwest Interstate Rail Commission Board, and SMCHS Booster Board. He was awarded the Upper Great Plains Transportation Institute’s Chairman’s Award in 2018, which recognizes individuals for contributions to transportation, research, education, and outreach at NDSU, as well as contributions to the viability of the Institute. He was also a trustee of the NDSU Foundation and Alumni Association.

Dennis married Maureen Bosch in 1981 in Fargo. Together they raised three children. He was a loving father and thoroughly enjoyed attending all of his children’s activities. He also enjoyed golfing, hunting, bird watching, and supporting NDSU athletics, especially football, as a Bison Team Maker.

Dennis was preceded in death by his parents, Ray Ming and Carol Ming Hovet; his stepfather, Donald Hovet; his father-in-law and mother-in-law, Andrew and Mary Bosch; and his brother, Harry Ming.

Memorials can be made to the NDSU Foundation.

To order memorial trees or send flowers to the family in memory of Dennis Ming, please visit our flower store.